The power of six in North

The power of six in North 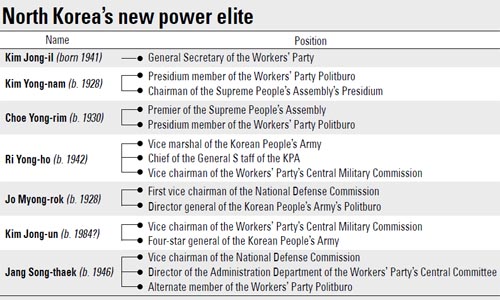 With roughly 80 foreign media members covering the recent historic events in North Korea - and North Korea’s own state media, in an unusual move, broadcasting live footage of the 65th anniversary of the founding of the Workers’ Party - the temporary opening has provided a rare look into the reclusive state and the new power elite within the secretive government.

Kim Jong-un has been featured in North Korea’s official media eight times since his first appearance in the news at the end of last month, when he received a four-star general title along with several others, a day before a major Workers’ Party convention.

Since then, pictures and video footage of the stocky heir-apparent have been all over the news in South Korea and worldwide. So far, he has always been shown near his father, Kim Jong-il, but never officially beside him, indicating a distance in rank between father and son.

Also, the North’s official news agency has often listed Jong-un after several other officials in its reports, usually sixth in line. Kim Jong-il, re-elected to the position of general secretary of the Workers’ Party, is first in North Korea’s power structure as the sole leader, with Kim Yong-nam following his lead.

Next in line is Choe Yong-rim, who was recently promoted to premier during a parliamentary reshuffle at a rare second session of the Supreme People’s Assembly this June. The first session was held in April.

Choe, in his new position, is currently in charge of North Korea’s economic policy and has been frequently reported by media as a close ally with Kim Jong-il.

With Premier Kim Yong-il ousted from his seat in June, possibly due to the failure of a currency reform that was enforced in North Korea earlier this year, the government’s decision to have Choe replace him was seen as a move to ensure a smooth succession.

Experts said during the reshuffle that Kim Jong-il was moving quickly to place familiar, trusted faces in the government’s top spots to make sure his son is ensured a secure position as leader. Ri Yong-ho comes in fourth as a relatively new contender in North Korea’s web of power. Ri, whose name has become familiar with Jong-un’s surprise appearances in the news, was promoted to chief of the General Staff of the North Korean military last year.

He was then given the title of vice marshal of the Korean People’s Army, the third vice marshal in the country’s history before the party convention.

During the party’s meeting, Ri was elected to an equal title as Kim Jong-un, a move many analysts saw placing Ri in a protective position to ensure Jong-un has the military’s support.

Ri’s role is also significant because of his family ties to Kim Jong-il - his father was close to Kim Il Sung and his mother acted as caregiver to Kim Jong-il after Kim Jong-il’s mother died in 1949. Fifth is Jo Myong-rok, who was appointed first vice chairman of the National Defense Commission and director general of the Korean People’s Army’s Politburo. The 82-year-old Jo has not been observed in recent public events likely because of apparent health issues, often resulting in Jong-un being listed fifth among government officials.

Among the recent changes in North Korea’s government and military, one thing has not changed: the power and position of Jang Song-thaek, Jong-un’s uncle and Kim Jong-il’s “No. 2 man,” as he is often referred to.

Although Jang was not given higher positions during the convention, analysts said this was because Jang already wields great power within North Korea. Jang is vice chairman of the National Defense Commission.