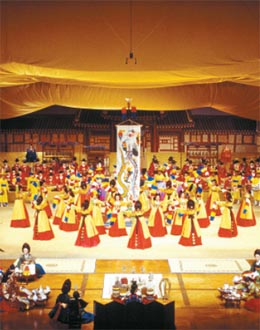 A scene from the traditional performance “Taepyeongseogok” by the National Center for Korean Traditional Performing Arts.

When heads of states, leaders of the international economy and the world’s media gather in Seoul for the G-20 Summit next month, Korea’s Ministry of Culture, Sports and Tourism and the Seoul Metropolitan Government plan to spice up the global event with culture.

The National Museum of Korea, the nation’s flagship museum of Korean history and art, is always the place to go to get a glimpse into Korea’s past. For the G-20 Summit, the museum is putting on a special collection from ancient dynasties of more than 220,000 pieces. The Gold Crown exhibition is showcasing 1,200 pieces of royal-family jewelry from the Silla Dynasty (57 B.C.-935) through Nov. 21. An exhibition featuring Buddhist paintings from the Goryeo Dynasty (918-1392) and East Asian nations opened yesterday and also runs through Nov. 21. During the weekend of the G-20 Summit, the museum will provide guided tours to 20 selected cultural heritage items and show a 3-D movie about Korean history.

A focal point for creative modern art will be the National Museum of Contemporary Art in Gwacheon, a suburb south of Seoul, which houses works of Paik Nam June, a Korean-born American video pop artist. It will display a collection of experimental new media artwork from Nov. 1 through early next year and 200 pieces by 45 artists from Korea, China and Japan from Nov. 8 to Feb. 20.

The National Library of Korea will introduce world literature and show foreign films produced by G-20 member nations. The event runs from Nov. 8-12.

In the neighborhoods of the main summit venue, COEX in southern Seoul, there is an arts complex that houses museums, an opera house, a music hall and a calligraphy arts museum.

The Seoul Arts Center will hold the World Opera Singers Festival, performed by the Korea Opera Group, from Nov. 10-16 in its theater. From Nov. 12-13, the Royal Concertgebouw Orchestra Amsterdam with Mariss Jansons will visit Korea for a concert at the music hall.

The National Center for Korean Traditional Performing Arts will showcase traditional Korean performances specially prepared for visitors to the summit. “Taepyeongseogok” is based on performances during a party that the Joseon Dynasty’s 22nd King Jeongjo held for his mother’s 60th birthday.

Another taste of Korean traditional performance can be found in the year-round “Miso” at Chongdong Theater near downtown Seoul’s Deoksu Palace. Visitors can see a Korean percussion quartet, fan dance and traditional narrative songs with subtitles in English. During the performance, guests are encouraged to take the stage and try to spin a large circular plate on top of a stick.

The 10th Seoul Performing Arts Festival coincides with the summit and runs from through Nov. 14. This year’s event introduces major international and domestic contemporary performances in drama, dance and various art genres by 28 artist teams from eight nations.

Seoul’s downtown has undergone a major transformation over the past decade. Gwanghwamun, the front gate of the royal Gyeongbok Palace, was unveiled in August after a four-year restoration project. The iconic gate in the heart of Seoul was constructed during the early part of the Joseon Dynasty and was burned to ashes during Japanese invasions in the 1590s and again in the 1950-53 Korean War.

Cheonggye Plaza will be lit for the Seoul Lantern Festival during the week of the G-20 Summit from Nov. 11-15. The 5.7 kilometer (3.5 miles) stream opened in 2005 after a massive city renewal project. The festival will present events such as celebratory performances by hallyu (Korean wave) entertainers and a fashion show.