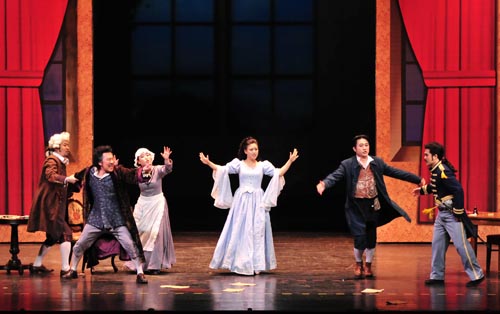 “The Barber of Seville” will be presented on Friday and Saturday as part of the Daegu International Opera Festival. The performance is a co-production by companies from six Asian countries. See THEATER, below left. Provided by the festival organizers

The Saturday morning concert series provides a range of classical music to start the weekend. Concerts are held every third Saturday of the month and the series continues into 2011.

Oct. 23: Leading Asian pop stars will gather in October to give Seoul a festive mood ahead of the G-20 Summit in November.

The Asia Song Festival is an annual pop music event in Korea. All proceeds will be donated to Unicef and earmarked for children in flood-stricken Pakistan. A total of 15 artists or bands from seven countries will participate, including Korean pop diva BoA. The tentative lineup also features Jane Zhang, dubbed China’s Mariah Carey for her high octave range, Taiwanese singer and entertainer Joe Cheng and Malaysian singer-songwriter and Asia-wide sensation Michael Wong.

Oct. 26: Israeli violinist Itzhak Perlman will perform in Seoul as part of the HyundaiCard Super Concert program. This will be the well-known virtuoso’s first concert in Korea in 19 years.

To Oct. 30: This festival has established itself as one of Asia’s major opera events since its inception in 2003. The festival includes productions from Korea and abroad and features “The Barber of Seville,” “Andrea Chenier,” “The Merry Wives of Windsor,” “The Marriage of Figaro,” “Simsan Kim Chang-sook” and “La Traviata.”

From Seoul, take a bus or KTX to Daegu.

To Oct. 24: This is a musical comedy about three 33-year-old women struggling to survive in the city. Every Saturday after the last performance, there is an after-party that is open to everyone.

THE PALACE, THE MUSICAL

To Oct. 24: This musical is based on bestselling Korean comic book “The Palace.” The comic has sold a record 1.4 million copies and the original TV drama of the same name had an audience share of close to 30 percent. The musical focuses on the romance between a young woman and young man from different backgrounds.

To Nov. 7: This Broadway musical by American composer Jonathan Larson is being performed with a Korean cast. Larson won a Pulitzer and two Tony Awards for his musical “Rent.” The musical “Tick, Tick... Boom!” is about an aspiring composer named Jon, who lives in New York in 1990. Jon’s friend wants him to join corporate America, while his girlfriend wants him to move to Cape Cod with her. But he doesn’t want to abandon the musical he’s worked on for the past five years and he has not yet given up faith that it will give him his big break. The story is autobiographical, as Larson himself had been trying to establish himself in the theater since the early 1980s.

To Nov. 14: SPAF 2010 will feature a variety of breathtaking performances, including plays, dances and multimedia work by 28 groups from Russia, France, Switzerland, Belgium, Poland, Lithuania, Bulgaria and Korea.

Saturday and Sunday: This festival celebrates pansori, traditional Korean narrative singing, and the contributions of legendary pansori singer Park Yu-jeon. Park was one of the nation’s best pansori singers, an accomplishment he was able to achieve through the support of King Gojong and his father, the Daewongun. The festival program includes performances of Korean traditional music, exhibitions displaying artifacts related to pansori and other items.

From Seoul, take a bus to Boseong Terminal.

To Sunday: Head out to Buyeo and Gongju to learn about the cultural heritage of Baekje, one of the Three Kingdoms of old Korea. Today, the region is home to Buddhist temples, royal relics and more.

The festival features two special events. One entitled “A Day at Sabi Palace” offers a re-enactment of royal ceremonies such as the king’s parade, coronation and welcoming party for envoys. “A Day at Ungjin Fortress” offers hands-on cultural activities to help visitors understand the Baekje era.

Some of Baekje’s long-unseen relics will also be put on display in a related exhibition.

From Seoul, take a bus to Gongju or take the KTX to Daejeon Station.

To Oct. 24: The Daegu Photo Biennale will exhibit work by more than 240 artists from 22 countries, most of whom are Asian or European.

The main exhibition is entitled “true(E)motion.” The subsections are entitled “Seconds of Life,” “Breaking the Edge” and “Helsinki School.”

The “Helsinki School” section exhibits work by the most well-known artists to come out of the school, including Ulla Jokisalo and Jorma Puranen.

Oct. 21 to 23: The festival, now in its sixth year, has some new elements for fireworks fans. The 60-minute presentation spans the entire world with presentations by teams from China, Italy and Portugal.

On opening day, pan-Asian actress Choi Ji-woo will sign autographs for fans and there will be a concert by up-and-coming K-pop bands.

From Seoul, take a KTX train to Busan.

Oct. 28 to 31: The Namdo Food Festival is one of the largest of its kind in Korea.

The food in Namdo is known throughout Korea as some of the country’s finest and this festival allows visitors to try some of the area’s more famous dishes for themselves.

Festival visitors will be able to wander through stalls offering samples of some 700 dishes from 22 cities and counties in South Jeolla.

The festival will be held in the picturesque Naganeupseong Folk Village in the city of Suncheon.

From the Dong Seoul Bus Terminal, take a bus to Suncheon Terminal.

To Nov. 7: The biannual contemporary art show in the southwestern city features photographic, installation and media works by about 120 artists from 31 countries. The title of the biennale is “10,000 Lives,” or “Maninbo” in Korean, after the epic poem by renowned poet Ko Un.

From Seoul, take a flight to Gwangju Airport or take the KTX to Gwangju Station.

Seoul Museum of Art and other venues

To Nov. 17: This showcase is focused on new media art.