Keeping history in a ‘safe house’

Keeping history in a ‘safe house’ 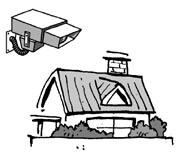 Located on the west side of the Blue House’s main gate is a small park between two alleys called Mugunghwa Dongsan, or Rose of Sharon Park. The park was created in July 1993 and is not much different from other neighborhood parks. It has a walkway and rest area. The only indication of the historical significance of the place is a small stone post, which says that the park was created on the site of a “safe house” and that it will serve “as a historical place to remember the difficulties we met on the road to democratization.”

The Kim Young-sam administration had pushed the plan to create the park under the pretext of cleaning up the closed-door politics of the authoritarian era. But after it was decided that a park would be created, the question of whether the banquet hall within the house, where the President Park Chung Hee was assassinated, should become part of the park.

Some claimed that though Park was criticized as a dictator, passers-by should not be allowed to walk over the site where he died. In the end, it was decided that a stone wall, 3 meters (9.8 feet) high and 30 meters (98 feet) wide, would be erected over the site to protect it.

Beginning in the 1970s, around a dozen presidential “safe houses” were created around the Blue House in Gungjeong-dong, Cheongun-dong and Samcheong-dong. Individually, the houses were known as the “Blue House Annex.” Together, they were used as places of entertainment for the country’s most powerful man or as places for collusion between politics and business. They were safe places not only for clandestine entertainment but also for the exchange of bribes and secret interrogations.

Generally, safe houses are places used by investigative authorities to protect crime victims or witnesses. In its war on the Mafia in the 1970s, the U.S. government created the witness protection program to keep witnesses from being killed in retaliation by the Mafia, and witness were often placed in safe houses.

In Korea, too, investigative authorities operate these kinds of safe houses for people who report crimes such as murder, robbery or domestic violence.

One of these houses was home of the late Hwang Jang-yop, former secretary of the Workers’ Party of North Korea. He had lived in a safe house after he defected to South Korea in 1997.

I can imagine what a dreadful feeling he must have had, living in a two-story house in Nonhyeon-dong, Seoul, for 13 years under the threat of assassination by North Korean agents. The house was protected by 20 security agents and equipped with security devices, including CCTV and bullet-proof windows.

As with the site of Park Chung Hee’s assassination, it seems that Hwang’s former place of residence should also be preserved.

Hwang’s house symbolizes national division, a reality that is well worth remembering.