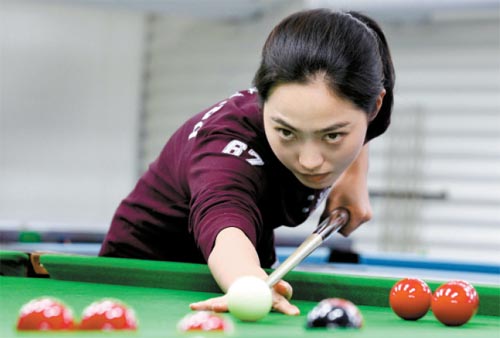 Cha Yu-ram lines up a shot during a media-day event at the National Training Center in Taeneung, northern Seoul, on Tuesday. [YONHAP]


Four years ago in Doha, Qatar, the then 19-year-old Cha Yu-ram participated in her first Asian Games, wielding a cue stick and dressed in a fancy costume as Korea’s representative in the eight-ball and nine-ball events in cue sports.

At the time, it seemed like a charmed life to lead. After all, she was simply trying to sink colored balls into holes on the table in a seemingly leisurely pursuit.

But Cha, now 23, said the experience was fraught with anxiety, strangeness and mistakes.

“I was too young to enjoy the Asiad,” Cha said in a telephone interview. “I didn’t know what to do when I stood there to compete.”

She reached the quarterfinals in the eight-ball event but was eliminated in the second round in the nine-ball competition. Few had expected her to stand on the podium but it was disappointing for Cha nonetheless.

But things have changed. Heading into the Guangzhou Asian Games in November, Cha is one of the gold medal favorites in pool events.

She won the gold for nine-ball at the 2008 Asian Indoor Games and earned the title at the 2010 World Women’s Nine-Ball Open.

Cha is now ready to enjoy herself.

“I’ll compete in the eight-ball and nine-ball events and target both golds at Guangzhou,” she said. “I’m in good form right now and will do my best at the Asian Games.”

Eight-ball, known as pocket ball in Korea, is the most common among cue sports. One player is assigned the striped balls, the other solids. Each player tries to use the cue ball to knock her seven designated balls into the pockets along the edges of the table. Once a player sinks all her balls, she can try to pocket the eight ball to win the game.

In nine-ball, competitors aim to pocket nine numbered balls in numeral order and the game is won by sinking the ninth ball.

For her double-gold medal hunt, Cha has to get past her teammate Kim Ga-young, who won silver in eight-ball at Doha.

Cha said she is looking forward to the in-house competition.

“I get pumped up and feel the sense of a challenge when I see other athletes do their best at the National Training Center [in Seoul],” said Cha. “That helps me a lot.”

And to bring home South Korea’s first cue sports gold from the Asian Games, Cha has launched a special project that could turn off a few diet-crazed female fans: She is trying to put on extra weight to build more endurance and to help her maintain focus over extended billiards matches.

“After finishing a two-hour game, I lose 1 or 2 kilograms. It’s exhausting,” said Cha, who weighs 47 kilograms (103 pounds). “My coach is always bugging me to gain weight to remain focused during a game.”

Cha said playing pool can be a challenging task. “The pocket ball game requires a high standard of concentration,” she said. “It uses up a lot of energy. So I am focusing on building up my strength before the Asian Games.”

Mentally taxing as it may be, Cha said she enjoys the pressure. She quit tennis for cue sports at 13 because she loved having to concentrate in the tight, calm atmosphere.

“Cue sports are very quiet and still and they look easy. But they’re very sophisticated and difficult,” she said.