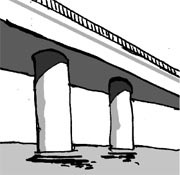 “Stop please / this is the last port / Sometimes, hats without an owner hang on the rail / and flutter in the wind saying goodbye / For girls, they put a big tear bowl / at the base of the column,” Kim Gi-rim wrote in his poem “Han River Bridge.” His description of a suicide evokes feelings of sadness and isolation.

In the poet’s lifetime, people often committed suicide by jumping into the river from the bridges running over it. This was largely due to the fact that the first bridge over the Han was built in 1917. The footbridge, which quickly became an attraction of Seoul, just as suddenly turned into a place of pain as a number of people used it to plunge to their deaths.

This kind of suicide was difficult for the authorities to deal with. In 1922, Yongsan Police Station even offered a prize for the best suicide prevention slogan. Various entries came in, including this one: “There is an old saying that sweet comes after bitter. Please stay alive.” Another arrived in the form of the lyrics: “The sweetbrier along the beach will bloom again in spring, but there is no return after life’s journey.” They put up a sign saying, “Please have patience,” at the rail of the bridge. To support the campaign, the government also set up a counseling center.

Although the authorities did what they could to prevent further suicides, it seems that they were not effective. A newspaper even reported that “The Han River, a resting place and playground for citizens, has become a place where we bid farewell to the deceased.” This is how the phrase “going to the Han River” came to mean “Committing suicide by plunging into the river.” The phrase is used in a passage in Yeom Sang-seop’s novel “Husband’s Responsibility”: “If she ‘goes to the Han River’ because you refused to meet her, the responsibility of her death will fall on you.”

The idea of committing suicide by jumping into the river has not changed much. It is an even more serious problem nowadays, especially because the number of bridges over the Han has increased to 24. According to statistics presented by the city of Seoul to a parliamentary inspection committee a couple of days ago, there have been a total of 2,475 suicides from 24 bridges since 2006 - an average of 1.45 cases per day. The Han River bridges still live in infamy of being suicide attractions.

In the 1920s, people committed suicide because of hardship in their lives, disgust about their existence and a broken heart, according to a survey by the government-established counseling center. Those same causes may even be the same today. It may be necessary to establish closed-circuit televisions, emergency telephone lines and suicide prevention fences to prevent people from committing suicide on the Han. But our efforts will be futile, even if we were to cover the river itself, as long as we disregard our neighbors.