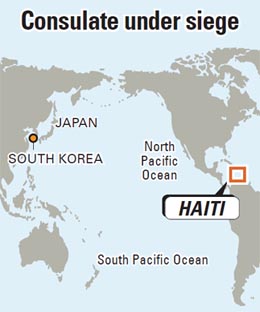 Korean offices in Haiti are in emergency mode after a brutal attack on the honorary Korean consul, his wife and staff last month near Port-au-Prince, according to a Korean diplomatic source yesterday.

The consul, who is a Haitian national, was wounded during the attack, and his wife of Swiss descent was kidnapped by four attackers, presumed to be Haitian, who broke into the consulate. She was later set free.

“The wife of the consul was released just recently, and we are looking into the details along with the local police who are carrying out an investigation,” said the diplomatic source.

“Two housekeepers for the consulate were raped while one neighbor who came to help the victims during the attack was shot and wounded by the assailants. The entire Korean society in Haiti is scared now. This is a situation where we need stronger protection policies for [Koreans living in the country],” said the source.

The consulate is located in Petionville, a residential and tourist area close to Haiti’s capital of Port-au-Prince. The area is known to be affluent.

Another Korean official said that Haiti is having problems with social instability and growing financial inequality among its citizens ever since the massive earthquake that devastated the nation earlier this year in January.

The official continued, “Acting consuls run the risk of becoming easy targets of local opposition groups as those from a higher social class within the native society are appointed as officials.

We don’t feel there is a high chance that the attack was carried out against the relationship between Haiti and Korea.”

There are currently 132 honorary consuls for Korea in foreign countries.