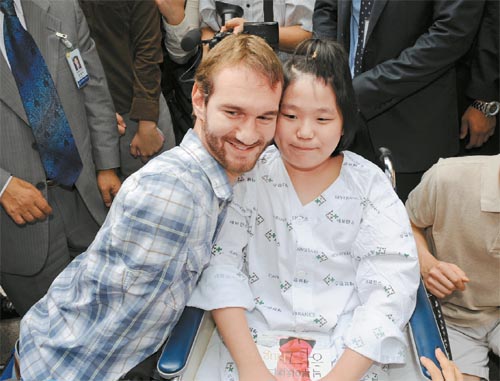 
A 12-year-old boy car-accident victim who has struggled through five months of rehabilitation to learn how to walk again met with Nick Vujicic, an inspirational speaker who was born without arms and legs, at Severance Hospital in Sinchon, western Seoul, yesterday.

Jeong U-hyeok was biking to school last May when a car hit him near the school gate, pinning him to the ground.

The flustered driver stepped on the accelerator, crushing Jeong’s legs and pelvic bone. He can’t walk or sit properly and suffered from depression, refusing treatment and food.

Jeong’s attitude began to improve after he saw a poster of Nick Vujicic in the hospital ward. Vujicic, 28, was born in Australia without limbs because of a rare disorder called Tetra-amelia syndrome.

He has become an author and inspirational speaker and is president of the nonprofit organization Life Without Limbs.

Vujicic came to Seoul last week to promote his book “Hug” and visited Severance Hospital yesterday to give inspiration to its patients.

“Doctors told me it was impossible for me to walk,” Vujicic said in his lecture. “But I can swim. So far, I have met four presidents around the world, and delivered lectures to 110,000 people. You never know what will pop up if you round every corner. I stand here because I embraced courage, and brought it into every corner of my life.”

Jeong was in his wheelchair in the front of the auditorium applauding more enthusiastically than anyone else.

“I feel ashamed of having complained about physical therapy,” he said. “He stands up there by himself even without arms and legs. I have all my limbs.”

A hospital director arranged a meeting between Jeong and Vujicic after the lecture.

“You had the accident because there is a bigger mission set aside for you,” Vujicic told Jeong. “You have to believe it. And never give up as I never did.” The two men embraced.