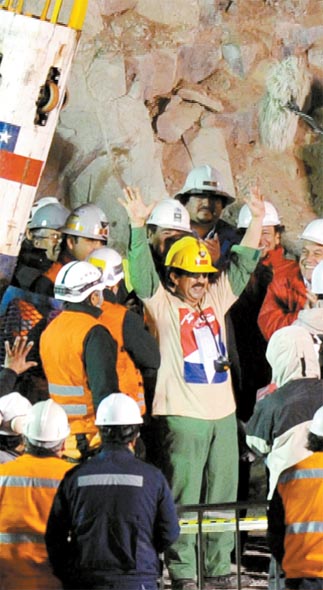 After the historic rescue of trapped coal miners in Chile, Korean President Lee Myung-bak sent a message to Chile’s president lauding the trapped men for their “undying will that never lost courage despite their desperate situation.” Korean netizens flooded the Internet with messages of marvel and admiration, such as: “That is truly a miracle,” and, “The Chilean government should be praised!” Ten weeks after the mine collapsed in San Jose, 800 kilometers north of Santiago, Chile, workers started pulling up the 33 trapped miners yesterday. Juan Illanes, above, was the third miner rescued. [AFP/YONHAP]