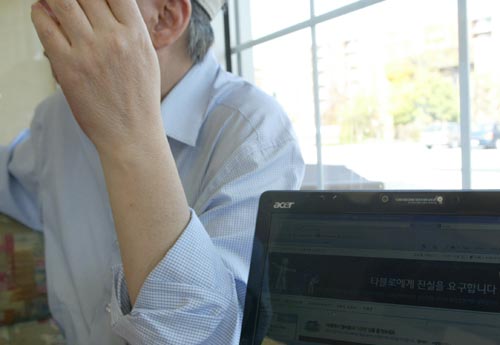 A 57-year-old netizen who raised questions about Korean singer Tablo’s academic record meets with the JoongAng Ilbo yesterday at a family restaurant in Chicago. He accepted that the singer indeed graduated from Stanford. By Lim Myeong-hwan


The netizen who raised doubts about Tablo’s university degree, identified by his last name Kim, said yesterday that he accepted that the Korean hip-hop singer graduated from Stanford, ending the Internet battle between Tablo and netizens.

“If we can say this is a game to reveal the truth, I am a loser and Tablo is winner,” Kim said. “I will not ask for Tablo to prove [he got his] degree anymore.”

Kim said he will quit as manager of the Internet forum “We Request the Truth from Tablo,” more familiarly known as “TaJinYo” in Korean.

Kim constantly raised questions on the site about the singer’s academic credentials and had as many as 180,000 members.

“I will leave the forum as a loser of the game,” Kim said. “It was quite an honor to meet members of the forum who supported my questions.”

Although he admitted the singer’s authenticity, he did not say he was wrong.

“I did this out of justice,” Kim said. “I think some people are still disguising their academic backgrounds, saying they graduated from privileged universities.

“I hope Koreans are honest [about their academic background].”.

He raised suspicion that possible high-ranking officials are shielding Tablo.

“I felt that some invisible officials are protecting Tablo because they possess fake degrees as well,” Kim said. “I guess they are covering up this case [to hide their own illegal background].”

Kim said he received thousands of comments and hundreds of e-mails about his forum site, most of which threatened him and his family.

“One of the e-mails said he or she will come to Chicago to gun me down,” Kim said. “My family members are suffering from these kinds of threats.

“The people threatening us are the real malicious netizens, not the members of TaJinYo, which just tried to reveal the truth.”

Kim also revealed that he borrowed his Korean friend’s online username, “Whatbecomes,” because he had lost his Korean citizenship after he immigrated to the United States.

Kim said he wants the singer to cancel his lawsuit against him and other people.

“As the winner of the game, I want Tablo to withdraw his complaint on the seven defendants,” Kim said. “Only two of them are members of the forum. Others are not at fault.”

The singer had been grilled by doubts on his academic credit since last year, but the JoongAng Daily displayed and his formal diploma and transcripts from Stanford University in June - they were confirmed to be official documents.

After finding that the diploma was genuine, police requested an arrest warrant for Kim on Friday.