Standout players hope to make their mark this year

Standout players hope to make their mark this year 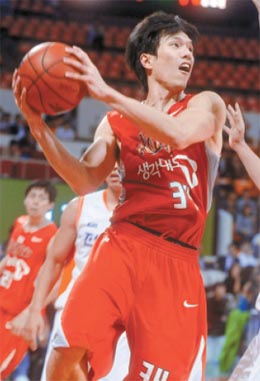 Basketball is a team sport but the strong play of an outstanding individual can elevate a team to unexpected heights.

Moon Tae-jong of the LG Sakers established himself as an elite player in his rookie season last year but there are others who are itching to contribute with the 2010-2011 KBL season starting today.

Kim Hyo-bum parted ways with the Mobis Phoebus and signed a five-year 513 million won ($457,600) deal with the SK Knights during the offseason. It’s the most lucrative contract in the KBL next to that of Dongbu Promy forward Kim Joo-sung.

The 27-year-old shooting guard averaged 11.1 points, 2.1 rebounds and 1.2 assists per game with Mobis in its title winning season last year. He can easily contribute more than 10 points per game and is also a strong defensive player. He can bring a lot to the table for the SK squad, which failed to gel as a team despite boasting plenty of talent last year. He also has a lot of responsibility weighing on his shoulders because of his contract.

“If I focus on personal goals, our team will end up like last season,” Kim said. “We already have scorers on the team so I will concentrate on taking care of the dirty work.”

Meanwhile, KCC Egis point guard Jeon Tae-pung is looking for redemption. Coming off a successful rookie season in which he averaged 14.4 points, 4.7 assists and 1.5 steals, Jeon experienced two setbacks this year. The Egis came up short against Mobis in the KBL championship series in spring and was left off the national team roster for the Asian Games this summer. Jeon was a strong candidate but Yoo Jae-hak and the coaching staff decided to go with Samsung Thunders forward Lee Seung-joon as the Korean team’s lone foreign-born player.

Jeon has fully acclimated to Korean basketball and has improved his floor leadership as well as decision-making skills. In two preseason games, Jeon came on strong, averaging more than 10 points and four assists, while averaging 10 minutes of playing time.