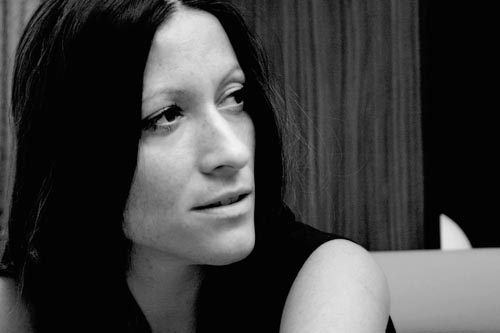 
BUSAN - Agnieszka Lukasiak is one of the many multinational directors who appeared at this year’s Pusan International Film Festival, which comes to an end today.

She was in Busan for the first time with her first feature film “Between Two Fires.” The film tells the story of a mother and daughter who leave their home country of Belarus to avoid child trafficking and settle in a refugee camp in Sweden.

In the camp, where rape and suicide are common, routine rituals such as taking a shower become risky missions and Martha (Magdalena Poplawska), the mother, struggles to protect her daughter from outside threats. The film, and especially Poplawska’s meaty performance, received rave reviews from PIFF programmers.

The film’s 33-year-old director was born in Poland but escaped to Sweden with her parents as a political refugee when she was 7. She has made several feature documentaries, including “Forgotten” (2005), which won the Nordic Documentary Award at the Nordisk Panorama - 5 Cities Film Festival in 2006.

She chose to make her current film a feature rather than a documentary because she “wanted to make it emotionally moving and feature film seemed a better form.”

In one interview with a local magazine, Lukasiak said she wants to make films that make statistics real. She said that before she started work on her current film, she was struck by a news headline that said that one third of the global population consists of refugees.

“I remember another article that said about 45 million people will be refugees because of climate change,” she said. “It’s a new thing.”

The film contains vivid depictions of the refugee camp the mother and daughter live in and Lukasiak said she often received questions about whether that part of the film was exaggerated.

“We had a screening in one refugee camp and the people there said it was a mild version of life in a refugee camp,” she said. “Reality is worse.”

Between Two Fires is likely to be released between November and January next year in Sweden, but the distribution company is still struggling with how it should be promoted.

“They think most people will not be able to take it because they don’t want to believe it’s happening in their country,” Lukasiak said.

She added that European countries accept the smallest number of refugees in the world.

“I think we’re very racist in Europe because we have such a strong culture and we’re kind of not very welcome,” she said.

In addition to highlighting the plight of refugees, the film also touches on universal themes. In the movie, the mother has to decide between her own happiness and her child’s.

“This kind of situation is very common,” Lukasiak said. “I wanted to make it more universal so that other people could engage in it.”

The director’s next project is likely to be just as thought-provoking as her previous work.

“I kind of look for stuff that upsets me,” she said.