Without the thrill of the chase, stalker film flops

Without the thrill of the chase, stalker film flops 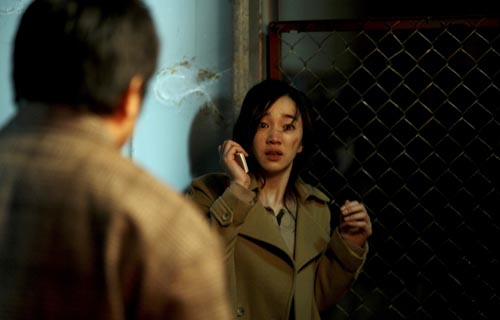 
The confrontation between celebrity and die-hard fan is nothing new to film.

A famous baseball slugger and his crazed stalker face off in the 1996 flick “The Fan.” The film “Misery” (1990) features a famed novelist and his fan fighting desperately for life.

Kim’s previous comedy “Girl Scouts” (2008) was not a success, and he probably needed something to lure the audience.

The film starts on the last day of Go Sun-young’s (Su Ae) radio show. After five years as a D.J., Go plans to take her daughter overseas. But her plans go awry when longtime fan Han Dong-su (You Ji-tae) calls in to the show to prevent her from departing. Eventually, he tells her that he has broken into her home and taken her family hostage and he says he will kill her family if she leaves the booth.

Kim probably wanted to heighten the tension of the situation by putting the lead character in a confined space, but he fails to do this because the plot lacks mystery and suspense.

Usually, a film creates a feeling of tension or anxiety when the audience doesn’t know who or what might be threatening the characters. But we learn in the beginning of the movie that Han has already murdered a number of other people before he starts threatening Go.

A film can also use its supporting characters to stimulate the audience’s nerves. That device could have been used here, but the film fails in this regard as well.

One of the supporting characters, Deok-tae (Ma Dong-seok), who is also stalking Go, could have developed into someone interesting. But we never feel that he is a danger to Go even though he appears in every critical scene.

The film focuses so much on why Han is so fixated on Go that the film gets bogged down in explanation and we never really feel the excitement of his actions.

Su has previously played fragile feminine characters that withhold their feelings. But this film requires that she show us her emotions so we can empathize with her. Unfortunately, she seems incapable of breaking out of her previous roles and we are left feeling empty.

Because You’s portrayal of the villain in the 2003 hit “Oldboy” was so strong, I expected him to show us a different kind of monster in this film. You is a good actor, but his performance here fails to impress.

Midnight FM seems to have it all: top stars, flamboyant car chases and a sumptuous musical score. Unfortunately, the only thing missing is the thrill of the chase.