On Nami Island, one man’s junk is another’s treasure

On Nami Island, one man’s junk is another’s treasure 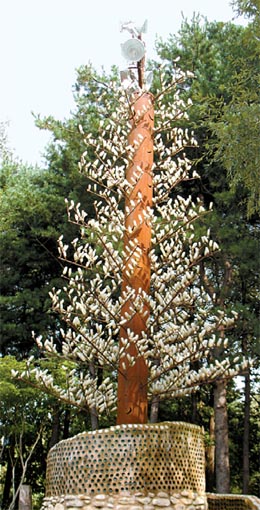 The installation art piece Lighthouse of Love and Peace is made from 10,000 cosmetics bottles. Provided by Nami Island Inc.

Another piece, the Lighthouse of Love and Peace, was made from 10,000 cosmetics bottles.

And in the Nami Jangdae pavilion, symbolism is rich; it was constructed on Nami Island from the remnants of a devastating fire that tore through one of Suwon’s Hwaseong Fortress watch towers.

Reusing waste is not a new concept in a country that recycles almost everything. But the managers of Nami Island - made famous by the television drama “Winter Sonata” - have made creating something beautiful out of almost nothing at all into an art.

Indeed, Nami Island itself was born from the waters of the Han River as the result of the construction of Cheongpyeong Dam in 1944. Min Byung-do bought and planted trees on the island in 1965, and in 1966 it was developed into a resort town.

From then on, this small moon-shaped island in Gangwon has been teeming with tourists. But it was not until the filming of Winter Sonata that its popularity exploded. Now people come from all over the world to see a natural paradise - but especially from countries in Asia where the TV program aired.

Aside from the island’s famed tree-lined walkways, installation art is another big draw.

Korea’s conglomerates, sensing opportunity for positive PR, have even gotten involved in the projects. 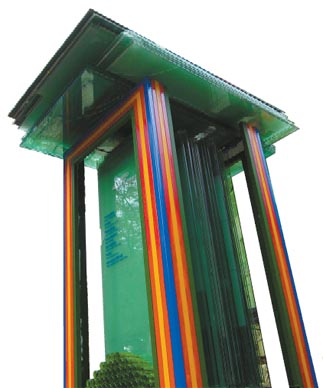 The glass fountain at Nami Island is made from used glass. Provided by Nami Island

Glass from Samsung Securities’ old headquarters in Jongno 2-ga has been shipped all the way here for the construction of a fountain.

Since it is difficult to recycle tempered glass, in many cases it is simply buried.

“Initially, we planned to bury the glass from the old head office, but with our company’s new slogan ‘Create with You,’ we tried to think of a new creative way of reusing it,” said Lee Byung-hee, executive director at Samsung Securities.

For Nami Project, as it is known, 13 percent of the 100 tons of waste that came from the relocation of the headquarters was reused here.

Although the island is famous for its beautiful trees, visitors are just as busy snapping photographs of a different kind of tree: a glass-tree-lined pathway.

The glass trees were made from 30 pieces of tempered glass from the Samsung Securities building - with green soju bottles attached. It is modeled after Nami Island’s famous Metasequoia path.

Getting the glass to Nami Island was no easy matter.

But the Samsung official said the bigger challenge was the actual creation of the art. Since it is impossible to melt tempered glass, there was a lot of restriction in the design.

Samsung Securities is not the only company that has been involved in the so-called “recreation project” of Nami island.

At the entrance of Nami Island, there is a piece of installation art known as the Lighthouse of Love and Peace. It was made using 10,000 cosmetics bottles provided by the nation’s biggest cosmetics company, Amore Pacific.

The lighthouse is designed to imitate a bunch of blossoming magnolia flowers. It was created by seven artists from the United States, Philippines, Korea and Serbia.

The nation’s top steelmaker - Posco - is also involved in some of Nami Island’s installation art displays.

Posco operated a program for employees to create art with scrap iron and wood waste.

Another piece, on the southern end of Nami Island, is a pavilion called Nami Jangdae that was made from the remnants of a burned-down lookout tower at Hwaseong Fortress in Suwon, Gyeonggi.

The island even uses recycled leaves.

Seoul’s Songpa District Office sends over about 200 tons of fallen leaves to Nami Island every year to create “Songpa Ginkgo tree lane,” which lures thousands of tourists and filmmakers for romantic autumn landscapes.

“Nami Island has been doing the waste recreation project since the beginning of 2000,” said Kang Woo-yon, chief executive officer of Nami Island.

“In recent years, more and more companies and public institutions have been interested in the project, so it is expanding.”