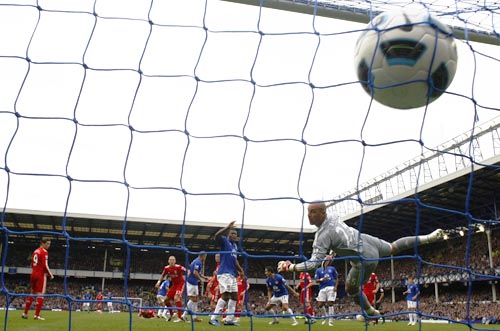 
LONDON - Liverpool’s new owners watched their team slump to a comprehensive 2-0 defeat at Merseyside rivals Everton, which sent them second to the bottom of the Premier League on Sunday.

Manchester City won 3-2 at Blackpool to move second in the table after Liverpool owners John W. Henry and Tom Werner watched goals by Tim Cahill and Mikel Arteta condemn the five-time European champions to their fourth defeat of the season. Fernando Torres went closest for the visitors at Goodison Park when his first-half header was turned over the bar by Everton keeper Tim Howard, but Liverpool offered little else.

They slipped one place in the standings on goal difference, level on six points with Wolverhampton Wanderers and bottom-placed West Ham United. Chelsea stayed on top after a 0-0 draw at Aston Villa on Saturday. City is second, two points behind, Arsenal is third after a 2-1 win at home to Birmingham City and Manchester United is fourth after a 2-2 draw with West Bromwich Albion at Old Trafford.

The jubilant scenes in London on Friday concluded one of the most dramatic weeks in Liverpool’s 118-year history, yet the euphoria of the takeover battle did not carry over to the pitch. Everton fans taunted their counterparts with chants of “going down” after the defeat that left Liverpool 19th in the table, their lowest ever position in the Premier League.

Manager Roy Hodgson was given a vote of confidence by Henry before Sunday’s match, but the defeat is certain to focus attention on the future of the Englishman who has presided over Liverpool’s worst start to a season in more than 50 years.

“I don’t feel it to be a crisis. The way we played today - I don’t think anyone would believe that’s the level of football a team in the bottom three or four would play,” Hodgson told Sky Sports.

“On the other hand, there’s six points from eight games and that’s a very, very poor return. We do need to start winning and climbing up that table soon, and until we do so I daresay the word ‘crisis’ will be bandied around.”

The breakthrough came from Seamus Coleman’s run into the area. The Irish defender’s cross took a deflection and the ball sat up for Cahill to drill his finish past Jose Reina.

Everton doubled their lead five minutes after halftime, when Sotiros Kyrgiakos’ corner pass fell to an unmarked Arteta, whose right-foot shot from the edge of the area swerved viciously and left Reina clutching at air.

At Bloomfield Road, Carlos Tevez put City ahead after 67 minutes with a neat touch at the near post from James Milner’s cross. Marlon Harewood got the faintest of touches to a free kick to bring Blackpool level with a header in the 78th minute, but City was back in front within a minute. Argentine Tevez robbed defender Ian Evatt - who claimed he was fouled - and his shot took a deflection before finding the bottom corner.

Spain forward David Silva made it three with a splendid solo goal, selling two dummies in the area and curling home a left-foot shot. Gary Taylor-Fletcher’s stoppage-time strike was a consolation for the home side.

Meanwhile, Wayne Rooney has reportedly told Manchester United that he wants to leave the Premier League club, although the club said speculation that the star striker will be sold in the January transfer window was “nonsense.’’

Several British newspapers - including the Guardian and Telegraph - reported on their Web sites Sunday night that Rooney has fallen out with Manchester United’s Alex Ferguson since allegations surfaced about the player’s private life last month. The reports said Rooney has told the club he will not sign a new contract, which could force United to sell the striker before he becomes a free agent.

The Sunday Mirror first reported on the alleged rift. Rooney, who joined United from boyhood club Everton in 2004 for more than 25 million pounds ($40 million), has a contract with United until June 2012.