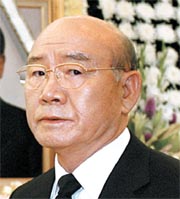 Former President Chun Doo Hwan, disgraced leader of Korea who was sentenced in 1997 to life imprisonment and ordered to pay 220.5 billion won ($199 million) in fines by June 2011, paid 3 million won to extend his deadline - taking advantage of a clause in the law.

Critics are decrying the move because it gives the former dictator a financial advantage in paying off his fine.

Chun was sentenced on charges of accumulating astronomical amounts of slush fund money and of being responsible for the massacre of possibly hundreds of protesters during the May 18, 1980, Gwangju Democratization Movement. Chun was pardoned in 1997 and released from prison, but his fines remained.

On Monday Chun paid 3 million toward the balance of his fine, which extended his payment deadline to October 2013. Under Korean law, if a person who is fined gives payments in advance of a deadline, the deadline is extended for several years.

The Seoul Central District Prosecutors’ Office said yesterday that because Chun paid 3 million won toward his debt on Monday his deadline has been extended.

Critics said Chun paid such a small amount of money because he was afraid he wouldn’t be able to come up with the fine’s balance by the deadline and his assets would be seized by government officials.

A prosecutor said officials are making an effort to “induce Chun to voluntarily pay off the fines.”

Chun, a former general, seized control of the country by military coup on Dec. 12, 1979, shortly after President Park Chung Hee’s assassination. Chun’s military dictatorship in the 1980s suppressed Koreans, and he brutally cracked down on demonstrators calling for democracy.