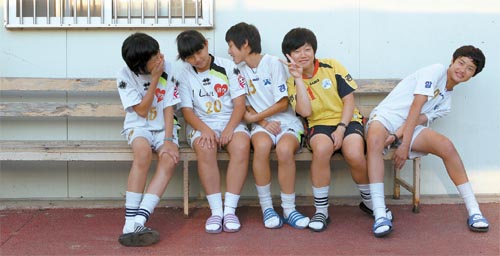 
When the U-17 women’s national football team won the 2010 FIFA U-17 Women’s World Cup on Sept. 26 it was an incredible feat of skill and perseverance that fired up the nation. The win also gave Korea its first title in a FIFA-sanctioned tournament.

Although Koreans showed tremendous support for the team during the tournament, the team’s rise to the top also exposed the sad state of women’s football in Korea. Teams are underfunded and lack the facilities and training to excel in the sport, making the victory all the more incredible.

Haman Daesan High School is the home base of Yeo Min-ji, 17, who won the Victory Cup, Most Valuable Player and Golden Boot awards at the 2010 U-17 Women’s World Cup, and Lee Jeong-eun, 17, who scored the first goal at the finals.

I arrived at the school after an hour-long drive on a winding road from Masan Bus Terminal on the day Yeo and Lee were scheduled to return to school after claiming the title.

It was a busy day for the girls’ team, and they attended a parade for Yeo and Lee. But things quickly got back to normal. Yeo and Lee were given the day off to rest, and the reporters who had arrived to cover the event dispersed as well. The girls on the team returned to school for another day of practice.

For some, it was a bittersweet time.

“I’m proud of my friends,” one of the girls on the team said. “And now I have hope that I can be successful like my friends if I practice harder. But all of the attention is on Min-ji. It’s natural, but a little bit disappointing.”

The middle and high school players at the all-girls school all live at the school. They have busy schedules that follow a similar routine from day to day. They wake up at 7 a.m., take a morning walk, eat breakfast and go to class. After lunch, they have afternoon and evening practice. Then, they meet to study or watch their favorite television programs before turning in at 10:30 p.m.

The team members don’t have much time for the usual teenage pleasures of hanging out with friends and eating tteokbokki (spicy rice cakes). And for most, going to an amusement park is a long-held fantasy.

“All of the team members dream about going to an amusement park,” another player said. “I went to one once when I was really young, but I don’t know when I will be able to go to one again.”

For team manager Kim Eun-jung, daily life is more like war. She plays the role of mother, coach, doctor, strategist and dorm mistress.

Her workload increased recently when the team’s coach quit. Boys’ teams usually have a manager and two coaches. But most girls’ teams have one manager and one coach at best, and it is rare for them to have a separate goalkeeping coach, as the boys’ teams do.

“I hired a goalkeeping coach instead of a regular coach,” said Kim. “I can do the field coaching, but I wanted to give the goalkeepers the right training.”

At around 9 p.m., after evening practice, Kim helps the girls get a snack and checks the players’ records. After taking care of an injured player, it is already past 11 p.m. She will spend the next couple of hours reviewing footage of rival teams. The next day, she will be up at 7 a.m. to do it all over again.

Kim’s workload far outpaces her salary. The local athletic association pays team mangers and coaches 1.2 million won ($1,079) per month, and the school offers a stipend for activities. As Kim said, it is hard for managers with a family to make a living on so little pay.

One thing that’s made her job easier is that the high school’s dorm and training facilities are better than most. Until this year, all of the players on the two teams lived in a temporary building near Haman’s public sports field. The building has concrete walls and no windows and doesn’t get much ventilation, making for humid summers and cold winters.

The high school team moved out of the building in February and is now housed in a facility on campus. The middle school team still lives in the temporary building but will move out when a new dorm is built in February.

The new high school facility is neat and clean. Outside, they have a grass field, unlike most schools that have fields made of sand.

“South Gyeongsang schools are more supportive of women’s athletics, so the environment for women’s football is getting better by the year,” said Kim Seul-gi, the Hamsung Middle School coach. “There are many teams that are worse off. In fact, for a women’s football team, the conditions here are not that bad.”

But she says there is still a long way to go.

“We’ve had several admissions inquiries since the U-17 women’s football team won the World Cup,” she said. Still, she worries that the state of the facilities will turn families away.

The players have their own ideas about what the team needs.

“When the U-17 team won the World Cup, we talked about how we want women’s football to develop,” middle school player Hong Hye-ji, 14, said. “We need more support and more junior players on the team. When the third years graduate, we will only have five players left. It would be great if there were a lot of younger players interested in football so we could play in the match next year.”

Girls on both teams have one goal: to play for the national team. But the reality is that the lucky ones among them will spend their careers playing for college or professional teams. Still, even that will remain a dream for some.

There are 16 high school women’s football teams registered with the Korea Football Association but only six college teams are, making for some stiff competition. And two of the colleges have already declared that they are not recruiting any new players next year. That means that of the 120 players who graduate each year, only 50 will be lucky enough to play on a college team.

The decrease in the number of college teams will also make it more difficult for the nation’s six professional teams to fill their rosters.

“I really want to play on a college team. So I have to play really well at the national sports festival,” said Park Hye-rin, 18. The festival is a recruiting event for college team managers.

But that event may be in jeopardy.

“I don’t believe the environment for women’s football teams can get better all of a sudden,” Kim, the middle school coach, said. “Even with more funding, the sunlight won’t reach the bottom. We don’t receive the 2002 World Cup surplus fund anymore. To make matters worse, people are talking about getting rid of the national sports festival. If that happens, we are going to be cut off from city-province funding as well. What school will run a women’s football team without funding?” Kim said with a sigh.