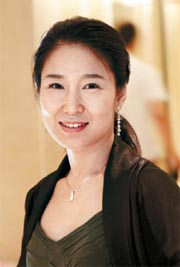 “The future of the Korean spa industry lies in the past,” said Han Jeong-sook.

Han is the first certified spa supervisor in Korea to receive approval from the International Spa Association. And she believes that storytelling is an important tool for marketing Korean spas.

“The origin of the spa goes back to ancient Rome, when worn-out soldiers rested at hot springs,” she said. “Korea also has fascinating stories to tell, and there are many old tales about famous hot springs from around the country.”

As the head of the Korea Spa Academy, Han has helped many young Koreans become professional spa supervisors.

But she is concerned about the industry’s future. Not only is there a proliferation of spas in the country, says Han, there are also few regulations over the businesses. Anyone can open a spa, and everyone claims that he or she provides an authentic spa services, she says.

“I am not a representative for the spa industry in Korea, but it is chaos,” Han said. “I am also worried that politicians and civil servants are not familiar enough with the concept of a spa. This puts the customer in danger.”

“The spa experience attempts to offer a balance between a clear mind and a healthy body,” Han said.

She encourages spa owners to offer more affordable programs, instead of the 100,000 won ($89.86) per hour programs offered by many of the country’s hotels and resorts.

As an alternative, spas could offer targeted programs that focus exclusively on a single treatment, such as aromatherapy or skin care.

She also suggests that spas integrate cultural elements into their services to distinguish themselves from their Asian competitors. This could involve Korean traditional colors or meditation retreats, she says.

She also believes the spa industry could also benefit from partnerships with the country’s burgeoning medical tourism industry.