Officials, celebs give donations for WeAJa

Officials, celebs give donations for WeAJa 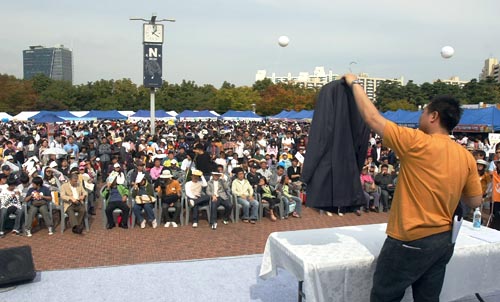 Participants take part in an auction at the WeAJa Market, the annual charity event held in Sangam-dong, Seoul, last year. By Kim Tae-sung

Han Young-sil, president of Sookmyung Women’s University in Seoul, donated kimchi, which she made herself in a traditional method and put it in a unique bowl crafted in a kiln. The amount of donated kimchi was a serving for 20 people.

Unification Minister Hyun In-taek gave a concrete piece of the Berlin War, a souvenir to honor the unification of the two Germanys in 1990.

“This item symbolizes my wish for reunification of the two Koreas,” Hyun said.

Choi Won-byeong, the CEO of National Agricultural Cooperative Federation, sent 88 four-kilogram (193 pounds) bags of rice that he cultivated himself.

While some officials tried to deliver political or social messages on their items, others donated antiques or exotic donations.

Park Jun-seo, former justice of the Supreme Court, donated a ceramic with a figure of a peacock carved into the ceramic. Shin Gak-su, the first vice minister for Ministry of Foreign Affairs and Trade sent a silver plate made in India. A rare tie made by the late Korean-American video artist Paik Nam-june was sent by Lee Je-hak, leader of Yangcheon District, Seoul.

Shinee, an idol singing group, sent five pink T-shirts that they wore for the SM Entertainment Live 2010 World Tour held in the United States. Shin Min-ah donated her dress, which she actually wore in the soap opera “Nine-tailed fox, my girlfriend,” which turned out to be a hit item.

A variety of events and performances by celebrities and civil organizations will be featured in the four markets, creating a more lively mood in the markets. Fifteen minutes before the Seoul market is opened, visitors will be treated to the eco-friendly performance “Dance with the Earth” by Beautiful Market, a social enterprise, whose profits from selling used items are donated to poor people. Crying Nut, the five-member rock group, will add to the festival’s mood. The group is known as a envoy for We Start - a movement to support the welfare of underprivileged children. The children in Goyang, Gyeonggi, who are supported by the We Start programs, will appear on stage to present a cute dance with jazz music.

At the Seoul market, the stalls will be occupied by 13 companies such as Asiana Airlines or Samlip General Food, 17 local Seoul organizations, including Seoul Global Center, and nine other organizations like the Embassy of the People’s Republic of China in the Republic of Korea. Participants and children will also have the chance to have a stall if applying for the market committee.