Bankers must still be careful of big pitfalls

Bankers must still be careful of big pitfalls 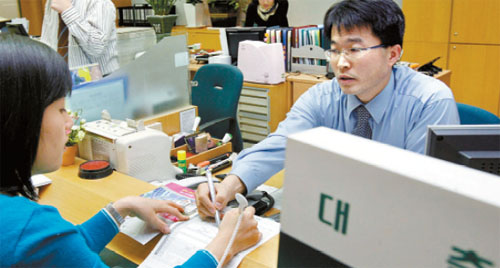 A bank employee consults with a customer applying for a loan. Household loans have risen sharply since the 1997 Asian financial crisis. [JoongAng Ilbo]

Several big-name banks from the 1990s weren’t able to make it out alive after the 1997 Asian financial crisis - Hanil, Chohung and Seoul Bank are some of the names now engraved on banking tombstones.

Woori Bank, created by the government in the late 1990s to absorb troubled banks, is still seeking to become fully privatized, with the process only expected to be completed next year.

Nonetheless, the banking industry appears to have emerged stronger, with the financial sector weathering the 2008 global financial crisis without requiring bailouts.

“The soundness of Korea’s financial sector was crucial to the resilience of the Korean economy during the global crisis,” said the International Monetary Fund in its 2010 report on Korea.

Economic analysts believe there are still plenty of potential land mines that could pose risks in the years ahead. They mentioned the following reasons why the banking sector might not want to feel too complacent about the future:

? Korea’s household debt levels are high compared to the United Kingdom, Australia and the United States, which have become synonymous with excessive spending. Household debt makes up about half of most banks’ lending portfolio.

About half of all household debt is related to housing. Some analysts worry that a recent decision by the government to revive the sluggish property market by relaxing mortgage restrictions is only making the problem worse.

“The government should take into account that current household debt is at a risky level,” said Lee Geun-tae, a LG Economic Institute researcher.

Government officials acknowledge the above-average household debt levels, but they say the household-loan delinquency rate is very low since most of the debt is held by high-income households.

? Bank loans to small and medium businesses have increased because of government pressure to save the SME sector from a cash crunch in the wake of the global financial crisis.

This category of loans makes up about a third of most banks’ lending portfolios, with total SME loans amounting to 445.1 trillion won ($397.5 billion). Analysts warn that SMEs pose a bigger hazard to banks than large companies because they are not as financially sound.

However, government officials say the debt burden of SMEs in Korea is similar to those in advanced countries and they do not pose a particular risk. Banks last year started to scale back loans to the sector with the government’s approval.

?Construction-project finance loans represent the latest challenge to confront the banking industry because of an increasing number of defaults resulting from the sluggish property market. Recent defaults have caused losses at some major commercial banks, although the biggest impact has been on savings banks.

? External financing is another vulnerable point for Korean banks, which rely on foreign banks for about 25 percent of their wholesale funding. The concern is that banks in Europe, for example, could be forced to cut back credit lines to Korean banks if financial conditions in Europe deteriorate.

Nonetheless, analyst say the financial sector’s foundation has improved greatly in the past decade.

“Korean banks today are creating profit by controlling risks, while in contrast, banks in developed countries are in a critical situation because they took too many risks,” said Jeong Young-sik, a senior economist at Samsung Economic Research Institute.