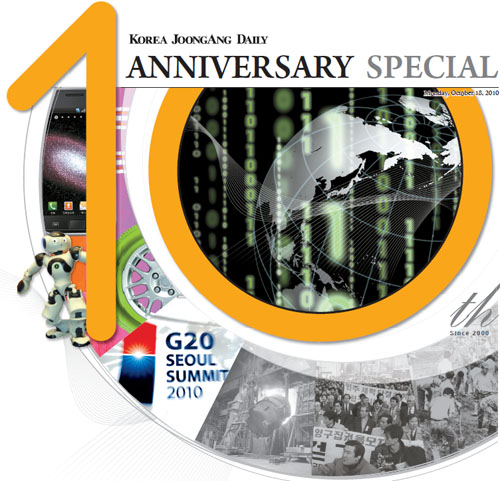 “When it’s ten years, even the rivers and mountains change.” - Korean proverb

The saying above applies to many of the economic dynamos of Asia, such as Taiwan, India, China or Hong Kong. But if you give it deeper thought, it fits its homeland best of all.

In the decade since the JoongAng Daily started publication on Oct. 17, 2000, the changes in Korea’s politics, society and economy, taken together, have been more profound than in any other Asian juggernaut, including China.

When the JoongAng Daily first went to print, Korea’s government was in the hands of former dissidents who had bravely fought the authoritarian governments of the post-war past. The most famous of all, President Kim Dae-jung, had just won the Nobel Peace Prize for his historic engagement of North Korea and his fight for democracy. The political pendulum swung back to the conservatives in 2007 and appears it will keep swinging for a long time - a tribute to the vitality of Korea’s hard-won freedom.

Just as remarkably, the economy, shaken to its steely foundations by the 1997 Asian financial crisis, was back to 9 percent growth in 2000. In the decade that followed, it completely restructured itself to become one of the most future-oriented economies in the world. This was also the decade when Korea emerged as a cultural powerhouse, exporting singing acts and television serials around the world, curling the toes of Japanese ajummas. Hard-assed, nuts-and-rivets Korea realized it was capable of soft power - cultural influence in other lands.

The JoongAng Daily, in partnership with The International Herald Tribune, chronicled this remarkable decade on a daily basis. As JoongAng Ilbo Chairman Hong Seok-hyun wrote on the front page of our first edition in 2000, this has always been part of the group’s mission - to be “Korea’s voice in the world.”

There’s something in the Korean character, or maybe the painfulness of the past, that makes the mountain ahead more interesting than the ones already conquered. So this anniversary special goes beyond the milestones in the rearview mirror and looks for the signposts to Korea’s future.

In the economic field, our future actually boomerangs to the past. During the financial crisis, outsiders said the vital players who built modern Korea - the trading and industrial conglomerates known as jaebeol - were Korea’s problem, not the solution. A decade later, as our pieces show, the pundits were utterly wrong. The big business groups have the led the way in identifying critical new industries to conquer, such as smartphones, electric cars and nuclear power-generation technology. We also look at the rapid evolution of Korea’s financial sector, from insular, government-led money funnels to a more modern capital machine - although risks for Korea’s lenders still abound. And as of today, Korea has one of the healthiest fiscal balance sheets in the world - another amazing evolution from the vulnerable past.

Socially, we look at Korea’s attempt to combat an aging population and low birthrate - dilemmas unresolved in Japan and China - by becoming a multiethnic society, with at least five percent of the population likely to be non-Korean by 2050. That will literally change the face of the country.

On the cultural front, we examine the future of Korea’s soft power, positing that its international influence isn’t about memory chips and microwaves anymore. Korea’s cultural exports are anything but soft, though, if you consider the film industry’s unique and successful sensibility, which drips with blood and a very Korean thirst for revenge. And did you know that people in Shanghai and Saudi Arabia love Korean fried chicken?

Politically, we approach a mountain that hasn’t budged at all in the last decade or even in 60 years, though it does show signs of crumbling: North Korea, and the idea that unification may be on the horizon, which would alter absolutely everything about South Korea’s future. If the Korean Peninsula’s existential dilemma finally ceases, how will it happen and what will it cost? South Koreans are just coming to grips with that question, and its causing a lot of disquiet. This tallest of mountains has remained on the horizon for 60 years - and Koreans aren’t eager to scale it too soon.

But they may have to. anthonyspaeth@mac.com