Uniting the Koreas: A taxing decision

Uniting the Koreas: A taxing decision 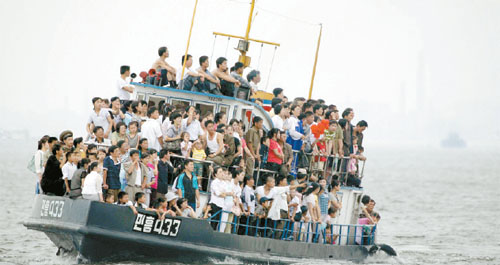 North Koreans travel to China for business in a packed boat on the Yalu River, the border between China and North Korea, on July 27. If the Kim Jong-il regime collapses, millions of North Koreans are expected to flee to China, Russia and the South.[REUTERS/YONHAP]


No single factor is more important to South Korea’s future than what happens north of the 38th parallel. For six decades, the South has shared the peninsula with a hermetic communist state that now subsists on narcotics trading and Chinese handouts. Armed with a tidal wave of artillery pointed at Seoul, in addition to a nuclear weapon or two, the North is run by a dynasty with an unpredictable paranoiac streak.

And if someone in the Kim clan ever chooses warfare over a bitter but essentially peaceful coexistence, South Korea’s future could be filled with misery.

But a third possible future is the unification of the sundered Korean Peninsula, the stated goal of both the North and South, although each has diametrically opposing visions of what kind of country would result. After six decades of oppression and indoctrination, it’s hard to say what the average North Korean thinks of the idea. In the South, unification is no doubt a cherished dream of many - but a fearful prospect as well.

Will 60 years of back-breaking work and tireless ambition be drained away by the cost of absorbing the dirt-poor and psychologically twisted twin? South Koreans look at the vast cost of Germany’s unification and think that was a walk in the park compared to what they’re facing.

In August, President Lee Myung-bak made a speech declaring unification an inevitability, something the nation should plan for - and start saving up for, possibly through a special unification tax. His comments set off a public furor, showing how a nation’s cherished dream can end up being one that is a struggle to wake up from.

According to a survey of 3,697 South Koreans nationwide conducted in September by the Youido Institute, a think tank run by the ruling Grand National Party, only 52.9 percent believe there is a need to prepare funds for future unification.

Various think tanks and research institutes have recently devised scenarios of how unification could occur, and most follow three main scenarios.

Scenario one: After Kim Jong-il’s sudden death, there is a power struggle in Pyongyang, causing chaos and a flood of people to head for the borders, including the DMZ. In an effort to keep the fleeing North Koreans within their borders, the South Korean president gives orders to release substantial amounts of aid and food. Seoul would then basically absorb North Korea.

Scenario two: After a series of negotiations, including bilateral talks between North Korea and the United States, as well as the six-party talks on the denuclearization of the North, Seoul and Pyongyang announce a summit between the two Koreas. North Korea pulls the plug on military threats against the South and its hypercritical propaganda. North Korea requests aid to repair its roads, railways and ports. More investment is poured into the Kaesong Industrial Complex, and the South starts spending heavily to modernize North Korea and raise its living standards in preparation for a peaceful unification in the not so distant future - within three to five decades.

Scenario three: Provoked by continued sanctions and isolation by the international community, North Korea attacks South Korea, resulting in a brief - but highly destructive - battle. North Korea’s lack of infrastructure and resources lead to its military collapse and the end of Kim’s regime. 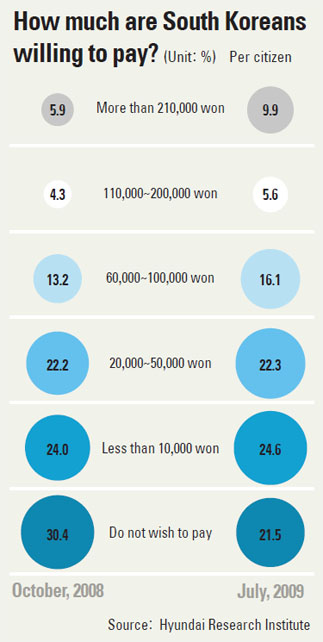 The one thing these scenarios have in common is that they will all require vast sums of money from South Korean taxpayers.

After the negative reaction to Lee’s speech, the Blue House tried to calm people down by saying the president only mentioned the issue to emphasize the need to prepare for unification, stressing that the government does not have a specific, detailed plan. But almost immediately, estimates for the cost of unification started floating around, along with the natural question: where is all the money going to come from?

According to the Youido Institute survey, 59.3 percent of South Koreans respondents want the government to establish a fund to prepare for unification, not unlike the existing Inter-Korean Cooperation Fund that Seoul runs to handle expenses regarding the two Koreas, including humanitarian aid sent to the North. Among those polled, 37.1 percent of them said unification should be put off until there is “no economic pressure on the people.”

The South Korean government has said it does not have specific plans or a calculated cost for unification.

The National Unification Advisory Council (NUAC) announced shortly after Lee’s address in August that it would create a task force to lead discussions regarding unification costs. According to research provided by the council, the total cost of unification calculated by several private institutions has a wide range, from $250 billion to $2 trillion.

“The cost of unification can be decreased if North Korea’s economy is opened smoothly and unification comes after it has economically developed,” said the council.

“Also, a set of policies will be needed to support the internal growth of the North Korean economy after unification, and we shouldn’t rush the consolidation of the two currencies.”

The Presidential Council for Future and Vision, an advisory board, said in a June report that if North Korea suddenly collapses without previously opening and liberalizing its economy, South Korea would have to spend $2.14 trillion through 2040 to support its crippled sister. This would be double the amount of South Korea’s GDP in 2009.

The council said only a seventh of that amount would be needed if unification happened after North Korea went through staggered phases of economic liberalization.

Stanford University’s Asia-Pacific Research Center said in January that 2,374 to 5,935 trillion won would be needed in the thirty years after unification to raise North Korea’s living standards to 80 percent of South Korea’s.

Samsung Economic Research Institute estimated in 2005 that it would take 546 trillion won over 11 years beginning in 2015 to raise the North Korean people’s minimum standard of living to that of South Koreans.

Regardless of the amount, questions remain on how South Korea is going to pay for unification and whether it should start saving now.

The NUAC has suggested several ways to raise money for unification.

The first - and possibly simplest - method would be to raise South Korea’s value-added tax rate, which is currently fixed at 10 percent. The council believes that an additional 10 trillion won per year could be raised if the VAT rate is increased by two percent.

“There is doubt that citizens will be persuaded to accept VAT hikes, even though the VAT rate in Korea is much lower than that of the average rate for OECD countries, which is 17 percent,” said a council spokesman.

A second method would be to reinstate the defense tax, which was abolished in 1990.

Another option is to raise income and corporate taxes, an echo of the “solidarity tax” the West German government raised to support East Germany after their unification. The German tax, which will be collected through 2019, raised income and corporate taxes. In Germany’s case, pressure on lower-income families was eased because the solidarity tax only affected people already paying a certain amount of taxes.

One method that doesn’t involve taxes would be to develop the Inter-Korea Cooperation Fund, of which only a fraction is used every year. Since its founding in 1991, only 5.54 trillion out of 9.95 trillion won raised has been used. The fund’s money comes from government contributions as well as long-term borrowing by the South Korean government and is maintained by the Ministry of Unification.

The NUAC also believes that a lottery could be established that would raise one trillion won per year for unification costs.

The last method would be to establish a development corporation or development bank to raise and maintain funds for unification, but it would also need funding.

However the money is raised, experts say that South Korea should start saving soon.

“There are concerns that it may be too late once the two Koreas are unified because there is such a gap between the two countries already,” said Kim Hoon-il of the Catholic Church in South Korea, which has helped with North Korean humanitarian aid for seven years.