Too many grads fight for too few jobs

Too many grads fight for too few jobs 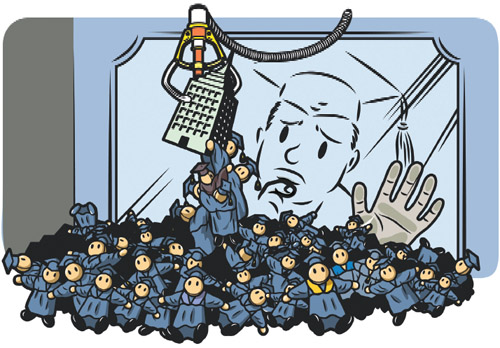 
Hong never imagined that getting a decent job would prove to be so challenging for him. And in many ways, he had legitimate reasons to be confident about his prospects.

Hong, who comes from an urban middle-class background, also went to a prestigious foreign-language high school, majoring in Japanese. He even participated in a decent amount of extracurricular activities, including a modern Korean history forum.

So what went wrong? 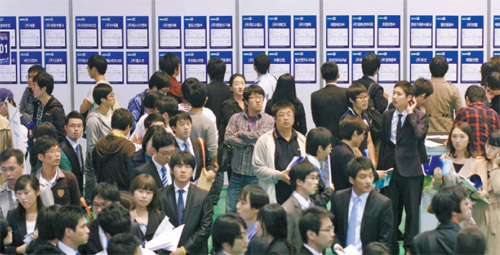 College students look at a job board last Friday during a job fair held at Changwon National University in Changwon, South Gyeongsang. [NEWSIS]

“It’s been a five-year struggle and during that time, I applied for almost every well-known conglomerate job in Korea,” said Hong, who requested only his family name be used. “I couldn’t even get to the interview stages for most because my qualifications are just enough to meet their prerequisites, but not enough to outshine major competition.”

Hong says that he is now looking at a mid-level management job at a convenience store near his house. “I can’t afford to not work for much longer,” he said, joking that he feels like a failure living with his parents at his age.

According to an OECD report this month, Korea has one of the lowest employment rates for college-educated people out of its 33 member countries, with only 77.1 percent of college graduates in 2008 gaining employment, compared to 87.8 percent in the U.K., 85.8 percent in Germany and 83.1 percent in the U.S. Korea was the second lowest after Turkey.

The report showed that the number of college graduates in Korea has been increasing an average of 5 percent a year - the fourth-highest growth rate among OECD countries.

Also, the number of Koreans getting doctorate degrees last year surpassed the 10,000 mark for the first time. In 2009, 10,322 Koreans received a doctorate degree, which is more than six times than that of 1985.

And with the global financial crisis came the slowdown of Korea’s urban middle-class boom. So now, the job market for college-educated Koreans - even those from top universities - is tightening more than ever.

The OECD report explains that Korea’s education sector experienced several problems as a result of the financial crisis. Among them are inequality of education welfare and students deferring college graduation because of difficulty finding employment.

Local experts say that a combination of Koreans’ fervor for higher education, a job market crunch and some colleges and educational institutes taking advantage of Korea’s heated education sector, is causing what they now call academic inflation.

“Ever since Korea started industrializing after the Korean War, there has been a great amount of advantages upon getting a degree from a prestigious university,” said Yu Hyun-sook, director general of higher education and human resource development at the Korean Educational Development Institute.

“For Koreans, going to a good school means much more than getting a decent job - it means that you will have a better chance in the ‘marriage market,’ get social respect and be able to get your children into good schools as well.”

Yu explained that while people in the West, especially the United States, are more oriented toward the practical side of learning, in Korea, higher education has been synonymous with a higher social status - an instant social climb, sort of like “marrying up.”

“In Korea, there is a strong preference to get white collar jobs because of our Confucian background,” Yu said. “It is quite different from just wanting to make money.”

Along with this tight connection between social status and education level, the vast difference in wages in larger conglomerates compared to small- and medium-sizes enterprises has created an imbalance in the job market. Although there is an increasing number of college graduates, many of them are reluctant to apply to an SME. Like Hong, they instead wait to apply for all possible positions at any conglomerate, sometimes for years, before they give up and settle down with a nonconglomerate job.

In a 2007 survey by Incruit, one of the biggest recruitment agencies in Korea, 123 of Korea’s most lucrative SMEs saw an average of 77.7 percent of their job positions filled that year. In addition, even if the companies do manage to fill their vacancies, 28.5 percent leave the company after less than a year.

In serious wage-gap situations, the difference between a conglomerate salary and an SME salary is more than 50 percent, according to Kim Yeong-bae, vice chairman of the Korea Employers Federation.

“If highly-educated people apply for lower-wage positions, this could ultimately result in a loss for the whole country,” Kim said.

Because a lack of government support has stunted SME growth, well-educated job seekers are unlikely to seek them out for employment, according to Chae Chang-kwan, a senior research fellow at Korea Research Institute for Vocational Education Training.

“We often compare Korea’s job sector with a wine glass, in that there is too much of a difference between conglomerates and other companies, with the middle, ‘waist’ part of the glass referring to the divide. Any kind of welfare or vision is lacking in a majority of Korea’s smaller companies, which is a huge problem. We can’t rely on conglomerates alone anymore as the economy becomes bigger.”

One of the biggest problems from this mismatch is wasting too much capital on education without getting a good return on investment. OECD data supports this point. It said that Korea’s annual expenditure per student for tertiary institutions is more than the OECD average.

Regional universities have taken advantage of Koreans’ high demand for post-secondary education by cramming more desks into classrooms, but not raising the quality of education. Critics have chastised such schools for not reinvesting their increasing revenue into better education.

Data from the Democratic Labor Party in 2007 shows that out of 175 four-year universities in Korea, 31 weren’t able to fill more than 80 percent of their freshman student positions.

The Ministry of Education, Science and Technology announced the names of 30 such universities this year that provide a relatively low standard of education and facilities, and said that it will limit student-loan support to the respective schools starting next year.

On the potential harms of Korea’s “academic inflation” affecting the economy in the long-run, many experts point out that placing importance in education itself is not the problem and that wanting to be educated is a positive thing. However, the real problem is that at present, a mismatch has occurred between industry and the education sector.

In a 2008 report by Deutsche Bank, it found that a large, well-educated workforce is the reason for Korea’s success in several key industries, including consumer electronics. But future concerns for Korea’s development is “a market flooded with unemployed college graduates .?.?. signs of ‘over-education’ .?.?. and skills mismatch across virtually all fields of occupations and industries.”

Lee Jun-hyup, a senior research fellow specializing in education and employment at the Hyundai Research Institute, said industry and academia aren’t in sync.

“In a country like Korea, with limited natural resources, our best hope for economic advancement is adequate human resources,” Lee said. “I think being educated is not a bad thing at all in this respect.

“The problem that needs to be fixed though, is that this highly educated population is not able to get a chance to prove its potential in the job market because of an imbalance in industry and education.”