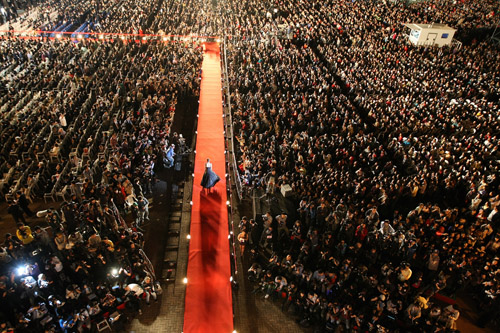 The Pusan International Film Festival began on Oct. 7 with the most world premiers in its 15-year history. Provided by PIFF


Promotional banners were removed from streetlights and the movie posters came down as the nine-day Pusan International Film Festival ended Friday, leaving the city of Busan feeling like a sleepy town following the departure of the thousands of moviegoers, directors, actors and reporters in attendance.

But the city is still basking in a post-festival glow after what was the most successful event in the festival’s 15-year history.

“It was a meaningful year for us as we achieved growth in both quality and quantity,” PIFF Director Kim Dong-ho told reporters at a press conference at the Haeundae Grand Hotel early Friday morning. 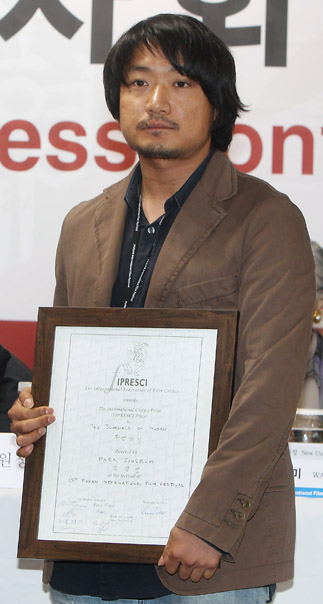 Korean director Park Jung-bum stole the spotlight with his first feature film “The Journals of Musan,” about a North Korean defector and his struggle to resettle in the South. The film won awards from PIFF’s New Currents and the International Federation of Film Critics. [YONHAP]

This year marks the end of Kim’s tenure as head of the festival, which has become the biggest for film in Asia. Kim helped launch the festival and has served as its director since its inception.

This year’s festival screened 308 films from 67 countries, including 52 international premiers and a record 101 world premiers.

The Asian Film Market, where visitors can buy and sell the rights to movies, drew 108 companies from 26 countries - 33 more companies than last year.

Since some companies are not allowed to disclose the details of their distribution deals, it is hard to calculate just how many films were traded during the film market.

But it was announced that the copyright to the Korean film “Poetry,” directed by Lee Chang-dong, which earned the best screenplay award at the 2010 Cannes Film Festival in May, was sold to distributors in Hong Kong, Japan, Syria, Portugal and Sweden, while “Hahaha,” directed by Hong Sang-soo, which received the Un Certain Regard award at Cannes in 2010, was sold to distributors in Mexico and Hong Kong.

This year’s New Currents awards, which are given to first and second-time Asian directors, went to two Korean directors - Park Jung-bum and Yun Sung-hyun - who were each awarded a $30,000 prize.

Park’s “The Journals of Musan” depicts a North Korean defector’s escape and resettlement in South Korea.

“After watching 13 films, The Journals of Musan kept lingering in my mind,” Taiwanese actress Yang Kuei Mei, one of the judges for the New Currents awards, commented in a press release.

For his work, Park also received an International Federation of Film Critics award. The film will be released in Korea later this year.

Yun’s “Bleak Night” is a coming-of-age story about three teenage high-school boys. Korean actress Kim Yun-jin, famous for her role in the American TV series “Lost” and also one of the New Currents judges, said in a press release that the film was a favorite of all of the judges.

“Pure,” directed by Swedish filmmaker Lisa Langseth, earned the Flash Forward Award in a unanimous decision by the judges. The award is given to an outstanding non-Asian director and is accompanied by a $20,000 prize.

Five more awards were given to seven directors and two actors.

Friday’s closing ceremony, hosted by veteran actors Ahn Sung-ki and Kang Su-yeon, was just one of many festival events held in honor of PIFF’s outgoing director.

But although he will no longer be calling the shots, Kim’s presence at the festival is likely to be felt in years to come. At a press conference in September, he assured the public that he would continue to support the festival where possible.

And in one of his final acts as festival director, Kim bid an emotional farewell to those gathered for the closing ceremony.

“The last 15 years were the happiest and most valuable moments of my life,” Kim said.