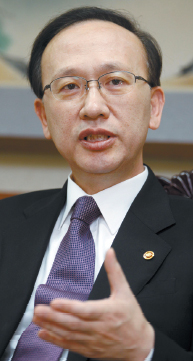 South Korean Unification Minister Hyun In-taek, 56, said the government will come up with a tangible plan during the first half of next year to raise money for the unification of North and South Korea.

In an exclusive interview with the Korea JoongAng Daily to commemorate its 10th anniversary, Hyun, 56, who has been in office for more than a year and a half, gave details on the timeline for a unification tax, which has been the subject of widespread debate since President Lee Myung-bak mentioned it in his Independence Day address in August.

The minister also elaborated on what North Korea will have to do to achieve better relations with its affluent neighbor and the meaning of Kim Jong-un’s recent elevation to eventual successor of his father Kim Jong-il.

Although the Unification Ministry has been around for 41 years and is responsible for everything related to North Korean policies and unification, the South Korean government has never drafted an official policy on how unification could or should come about. That will change in the next few months, Hyun said.

“We are moving on a schedule that has selected groups and committees researching how unification will happen, and they will complete their analysis by this December or next January,” Hyun said.

“Their findings will then be broken down and closely examined, and through this, the government will come up with a draft by next April. That will be our first draft, and after we solicit public opinion, we will submit the plan to the National Assembly. Hopefully within the first six months of next year, the government’s draft will be confirmed.”

Hyun visited Germany this month to learn more about its experience with unification.

“During my recent visit with Germany’s Minister of the Interior, he said to me: ‘At the time of our unification, Germany’s safe was empty,’” Hyun said. “That was a metaphor, of course. What he meant was that the country had gone through a difficult time during its unification because it happened with no funds prepared”

Pyongyang has recently shown a warmer side, requesting various kinds of talks in the aftermath of the sinking of South Korea’s Cheonan warship. The South Korean government is not entirely convinced that the North is being upfront.

More sincerity is definitely needed before a summit between the two countries’ leaders is possible, he said.

“Summit talks between North and South Korea are most definitely an important means of reaching the goal of stability and peace on the Korean Peninsula,” Hyun said. “The questions we have now are when might they be held and what can be accomplished at a summit. Another big question is whether North Korea is approaching the goal with sincerity, which could affect our decision on whether to hold the talks. However, we have not noticed that sincerity yet.”

As an example of how North Korea has to show sincerity, Hyun mentioned the issues of family reunions and South Korea’s freeze on tourists visiting Mount Kumgang after a South Korean tourist there was shot and killed by a North Korean soldier in 2008.

“You need to look at the chain of events when seeing the Mount Kumgang problem,” Hyun said.

After North Korea requested in September that the two Koreas hold reunions for families separated during the Korean War, it demanded South Korea resume the cross-border tours as a precondition. South Korea refused, after which the North desisted and agreed to hold the reunions with no strings attached.

Tours to Mount Kumgang aren’t likely to resume soon, Hyun said, because of the North’s intransigence on safety measures. “We suggested very detailed outlines, during working-level talks in February, of what North Korea has to do in order to prevent this from every happening again,” he said. “These are very realistic measures that should be there in the first place in order for our citizens to tour the area. They have not moved one step and not shown one sign of solving the situation, and actually put pressure on us to restart the tours. This we cannot accept.

“[The solution] is very simple. We have offered the answers; now it’s time for North Korea to respond.”

The South Korean government has had a hard-line stance toward North Korea since the North conducted two nuclear tests and several missile launches in 2009. The Unification Minister was adamant that Seoul’s stance had not weakened even as it recently approved the delivery of 5,000 tons of humanitarian rice aid to the North.

“Aid on the scale of tens of thousands of tons is political aid,” Hyun said. “The government has no plans to give large-scale political aid to North Korea. But even in the wake of the Cheonan sinking, we have never deviated from our policy to provide humanitarian aid for the very young and elderly - those truly in need.”

In discussing Kim Jong-un’s recent rise to successor of his father Kim Jong-il, the minister chose his words cautiously.

“We’ll have to watch carefully whether this succession is a success or not,” he said. “How quickly political stability may come about in the next regime has yet to be seen, as well as the stabilization of North Korea’s economy and society. Also, whether the succession is received positively internationally should also be observed. When North Korea said it was going to be hold the first Workers’ Party convention in 44 years, we anticipated a prelude for succession. The lid was opened and what we saw was incredibly speedy and unexpected.

“Right now, this is not the next regime. It is true that the steps for succession have started, but North Korea hasn’t officially come out and announced, ‘this is the succession.’ We feel North Korea should keep in mind what can help it live peacefully with other countries in the international society, along with South Korea.”

Hyun also said stronger ties between North Korea and China shouldn’t be viewed as a threatening phenomenon, as China could help North Korea open up to trade and economic reforms.

“Solving the nuclear problem, and then feeding its people and raising their quality of life by opening its doors and reforming - wouldn’t that be the right direction, the flow for [North Korea’s] history?”