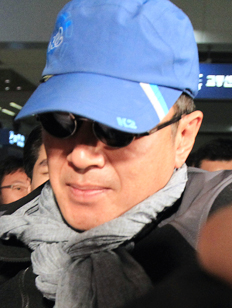 Prosecutors raided the home and office of Taekwang Group Chairman Lee Ho-jin on Saturday, immediately upon his return from an overseas trip as part of their investigation into Taekwang’s alleged slush fund.

Prosecutors believe the fund was used to illegally lobby for changes in the broadcasting law in 2008, which allowed Taekwang to take over a cable TV company, Qrix.

Prosecutors within a week will question Lee in connection to the allegations. The prosecution also requested the Ministry of Justice to prevent Lee from leaving the country again.

The raid of Lee’s office and his residence came several days after prosecutors raided Taekwang Group’s headquarters in Jangchung-dong, central Seoul on Oct. 13.

Investigators at Seoul Western District Prosecutors’ Office stormed into Lee’s Gwanghwamun office, which is located on the 24th floor of Heungkuk Life Insurance headquarters in central Seoul, and Lee’s residence in Jangchung-dong at 9 a.m. on Saturday.

Lee’s office at Heungkuk Life Insurance headquarters is regarded as Taekwang’s control tower in dealing with top secrets of the company and Lee’s family affairs, according to sources.

According to prosecutors, Lee allegedly created a multibillion won (multimillion dollar) slush fund with stocks he inherited from his father, Lee Eam-yong, the founder of Taekwang Group, and kept it in a bank account opened under a borrowed name and used the money for bribing officials at the Korea Communications Commission and the Blue House to expand its cable TV business.

Lee Ho-jin is also suspected of an illegal wealth transfer by selling stocks of affiliated companies at low prices and then giving them to his 16-year-old son, Hyun-joon.

According to prosecutors who on Friday questioned Park Yun-bae, president of Seoul Investment Company, which is a minority shareholder of Taekwang, Park said the proceeds from the stocks formed part of the alleged slush fund for lobbying government officials in 2006 to revise the broadcasting law, which didn’t allow the company to purchase cable TV company Qrix Communication, Inc.

According to Park, the borrowed -name account is in Goryo Savings Bank and is worth about 400 billion won ($ 359 million). Park will be summoned again today.

Park sent a report last month to the Seoul Western District Prosecutors’ Office that said the Taekwang chairman illegally acquired Qrix and had a slush fund.

Suspicion about Taekwang’s lobbying was raised when Qrix Holdings, the holding company of Qrix Communication, Inc., sold 30 percent of its shares in 2006 to two companies, the Military Mutual Aid Association and Fine Partners Corporation.

Taekwang made a contract with the two companies to buy the shares after two years, promising to pay back the full price and 10 percent in compound interest.

After two years, the broadcasting law eased restrictions on ownership of cable TV companies, and Taekwang got control of Qrix with its 30 percent share. In 2009, Taekwang bought the remaining 70 percent for 260 billion won.

Prosecutors suspect Taekwang lobbied the Blue House and Korea Communication Commission to change the broadcasting law to allow the purchase of Qrix, given that Lee Ho-jin’s maternal cousin, surnamed Lee, worked as a Blue House media and public opinion officer from 2008 until February last year.

Lee’s cousin resigned in February of last year after he came under fire for an attempt to manipulate public opinion about the Yongsan demolition tragedy that resulted in the deaths of six people, including a SWAT officer.

Lee’s cousin sent an e-mail to the National Police Agency, asking police to divert attention away from the anger caused by the Lee Myung-bak government’s handling of the Yongsan demolition protest.

The e-mail also said police should heighten publicity surrounding the Gunpo serial murder case that took the lives of seven women from December 2006 to December 2008.