Echoes of a masterpiece

Echoes of a masterpiece 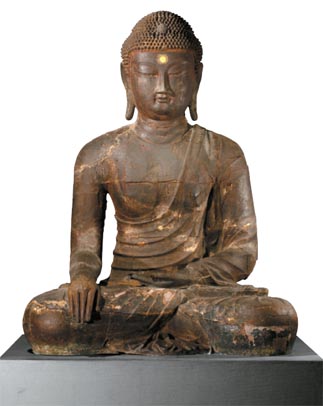 Location: The National Museum of Korea


This iron statue was moved in 1911 from the monastic site of Hasachang-dong, Hanam, Gyeonggi, to the Buddhist sculpture room in the National Museum of Korea’s Fine Arts Gallery. A stone pedestal remains on the site in Hasachang-dong.

The statue has the same hand gesture as the Buddha in the Seokguram Grotto. However, since it has an unnaturally slim waist and abstract details, it is presumed to be from the early Goryeo Dynasty (918-1392), whose art was influenced by Unified Silla. The statue has traces of varnish on its knees, indicating that it was originally covered with a thick coat of varnish and finished in gold.