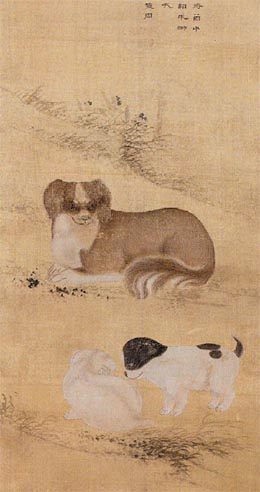 Flowers and animals often appear in artwork to depict paradise - a world in which people live in harmony with nature.

This is the picture of paradise presented by Kansong Art Museum in Seongbuk-dong, northeastern Seoul. The museum is showing 14th century artworks from the late Goryeo Dynasty (918-1392), as well as 18th century works dating from the mid-Joseon Dynasty (1392-1910), in an exhibit entitled “Flowers, Animals and Birds” that runs until the end of the month.

The museum, established in 1942, was Korea’s first private art gallery. It is known for its collection of rare Korean artifacts and holds more than 10 National Treasures, the largest number for any private museum in the country. Through the collection, the museum’s founder Jun Hyung-pil, who goes by the pseudonym Kansong, is hoping to protect Korean cultural assets from being lost overseas.

The exhibit attempts to trace the transition Korean artists made as they went from mimicking the works of Chinese artists to developing their own style. In the earlier works, artists not only copied the Chinese style but also the animals and objects that appeared within.

The piece “Two Sheep,” by King Gongmin (1330?1374) of Goryeo, which is the earliest painting in the exhibition, features two sheep with black spots, even though the animals were not native to Korea at the time.

“It is assumed that the king made his painting based on the sheep he saw in paintings brought from China,” Choi Wan-soo, the director of Kansong Art Museum, said at a press conference on Monday. 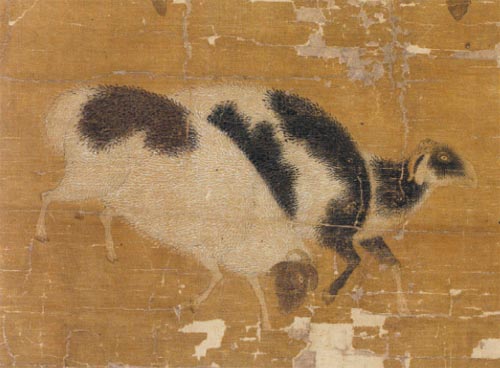 Kim Hong-do’s (1745~?) painting of a mother dog and her puppies, top, and King Gongmin’s (1330-1374) painting of two sheep show China’s influence on the art of the late Goryeo and early Joseon Dynasties. Provided by Kansong Art Museum


Wild animals also make an appearance in the paintings on display. Water buffalo, also not native to Korea, appear in almost every 16th century painting here, again as a result of the paintings filtering into the country from China.

“If artwork were compared to a flower blossom, the ideology would lie in the roots of the flower,” Choi said. “And just as Korean society adopted neo-Confucianism from China in the early Joseon period, Korean artists adopted the artistic style and content of the paintings from China during this time as well.”

But Korean artists soon began developing their own painting styles. They also began to include Korean animals such as magpies, cats and horses, which are native to Korea, in their works.

In his painting “A Cat on One Fall Day,” Jeong Seon (1676-1759), whose pseudonym was Gyumjae, a black cat reclines under the shade of a flower. Both the cat and flower are native to Korea.

Gyumjae was a master of space who made good use of perspective.

“Gyumjae knew just how to place the objects in his work,” Choi said. “He made sure that he got all the details, but he took some artistic license with the size of the objects to give the entire painting a better structure.”

The flower petals and the leaves on the stem are painted in sharp detail and the cat’s tail is carefully painted with curves. The positions of the cat and the flower looming over it are balanced, but they do not reflect the real proportions of a cat and flower, Choi said. In Gyumjae’s painting, the flower is bigger than the cat’s face.

Gyumjae’s use of color is unique as well. In the cat painting, he uses a bright shade of pink to make the flowers in the background stand out.

Many of the artists who followed in Gyumjae’s footsteps tried to emulate his style.

In a painting of a cat by Byeon Sang-byeok, each hair around the cat’s mouth is visible and the cat’s fur appears plush. Red flowers and big leaves decorate the backdrop and give the painting balance.

According to Choi, art changes in a 250-year cycle. Korea is currently at a stage in which art forms from different countries are being incorporated into traditional styles.

“Korean artists have just started imitating the styles of Western artists,” Choi said. “I think they’re doing a good job of mimicking them, and I don’t doubt that they will soon establish their own styles, just as our ancestors did.”

The museum is only open to the public twice a year, once in May and again in October, and admission is free of charge. The exhibitions run only for about two weeks, which means there are long lines to get into the museum every time an exhibition is held.