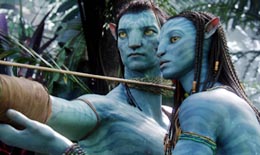 The world’s highest-grossing film and one of the most awarded TV shows have also been shown to be some of the greenest productions around.

“Avatar” and “30 Rock” were among the winners at the 2010 Environmental Media Association awards on Oct. 16, which recognized individuals, organizations and productions that help increase public awareness of environmental issues.

The awards were presented at a ceremony at Warner Bros. Studios and featured organic food and compostable dinnerware.

Actors Olivia Munn and Jason Ritter hosted the event, which was sponsored by one of Hollywood’s favorite green vehicles, the hybrid Toyota Prius.

Other productions recognized for spreading a green message were the documentary “Gasland” and TV shows “Bones” and “Handy Manny,” among others.