Twenty-one North Koreans, many of them families, wave at Incheon International Airport upon defecting to the South on Sept. 12, 2002, in a file photo taken by Kim Tae-seong. Media spotlight on the arrivals of new defectors has dwindled as the number of defectors jumped over the past decade.[JoongAng Ilbo]


If you were to meet a defector from North Korea on a bus or at a social event, what would that person be like?

Would he be a strapping former grunt from the North Korean army who relied on his physical courage to make his way South? Or a North Korean merchant doing business in China who used his connections to find a surreptitious route, and a new future, in Seoul?

The answer is neither. The average defector these days is a woman in her 30s, a high school graduate who was unable to find work in North Korea, who came through China with her family to get to South Korea.

The Ministry of Unification estimates the total number of defectors who entered the South since the beginning of the 1950-53 Korean War hit 19,569 at the end of August. Next month, it will surpass the 20,000 mark, and an exponential increase is expected to continue over the years - especially if there’s turmoil in the North.

“The 20,000 mark is significant as it indicates the considerable presence of North Korean defectors have and will increasingly have in the South,” said Cheong Seong-chang, a North Korea analyst at Sejong Institute.

In earlier years, men outnumbered women because they were able to weather the hardships of escape, and many of the defectors were soldiers who directly crossed the inter-Korean border, one of the world’s most fortified, by land or sea. But as going through China became available as an easier route, the trend reversed in 2002. Last year alone, 2,259 women defected to the South, more than three times the 668 men.

“North Korean men are tied to work, whereas women, as housewives, are able to travel more freely and eventually get across the border into China and then come South,” said a ministry official. 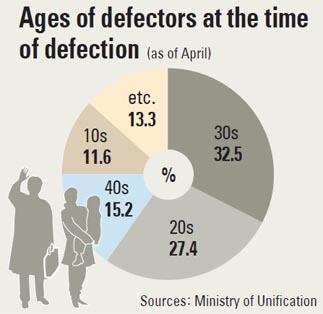 Stepped up monitoring by China of North Koreans staying in its country - and an increasing trend of sending them back to the North - is also making it harder for men to defect, observers say. Women, on the other hand, are safer in China because they can work as housemaids, a vocation that keeps them off the radar of Chinese authorities.

As the number of defectors in the South increases, more of their family members try to join them. According to Unification Ministry data, around 40 percent of the defectors in recent years followed families or relatives to the South.

Family-linked defection is bringing more North Korean youth. Around 2,700 out of 19,569 defectors as of the end of August (13.8 percent) were children or teens at the time of defection. When they finish a three-month Hanawon stay, they are transferred to elementary, middle or high schools.

But according to the ministry, 8.8 percent of the students enrolled in middle school and high school drop out, compared with an average drop-out rate of 1.4 percent for South Korean students at secondary schools.

Getting a job is hard for defectors. A January survey commissioned by the Unification Ministry and conducted by the Korea Research Institute for Vocational Education & Training showed that 13.7 percent of defectors aged 15 and 64 were out of work as of last November, four times the unemployment rate for Southerners.

A majority work in blue-collar jobs, and defectors earned an average of 1.27 million won ($1,134) a month last year, ministry data showed, less than half of the average wage in Seoul.

Because of adjustment challenges, one in 10 North Korean defectors committed suicide in 2008, a rate that rose to 16.3 percent last year, according to data collected by Representative Koo Sang-chan. Those figures compare with the 5.2 percent and 6.2 percent suicide rates among South Koreans in the corresponding years.

“The biggest stumbling block to defectors settling in the South is social prejudice,” said Lee Soo-jung, a professor at the University of North Korean Studies at Kyungnam University. A survey by the Organization for One Korea, a nongovernmental organization that helps North Korean defectors, found that less than 10 percent of defectors regarded themselves as South Koreans.

“They find themselves stuck in environments keeping them from openly saying they came from the North yet also from being assimilated with South Koreans,” Lee said.