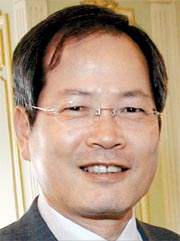 Chun Yung-woo, South Korea’s former chief nuclear envoy, was named top presidential security secretary yesterday, raising the prospect that Seoul is moving toward re-engagement with the North and that the stalled six-party denuclearization talks can be resumed.

The Blue House said it appointed Chun, second vice foreign minister, as the senior secretary for foreign affairs and national security. The post has been vacant after its former occupant, Kim Sung-hwan, became foreign minister this month. Chun will officially take his position today.

Chun, 58, a career diplomat since 1977, was the top negotiator in the six-party talks for nuclear disarmament of North Korea between 2006 and 2008. He also served as deputy envoy to the United Nations between 2003 and 2005. He has been a vice foreign minister since last year.

“We expect [Chun] to work in step with Foreign Minister Kim Sung-hwan ... and to assist the President on the current foreign affairs issues including the G-20 Summit,” she said.

Leaving the top presidential security adviser’s post vacant for as long as 10 days is not common, which analysts say is an indication of the depth of the government’s dilemma of where to take the inter-Korean relationship.

Kim Tae-hyo, presidential secretary for national strategy, was considered as a candidate for the spot along with Chun, sources said.

Jung Chang-hyun, professor of North Korean studies at Kookmin University, said the selection of Chun signifies a change in the government’s policies toward North Korea.

“It appears the government is preparing to have six-party talks resume by early next year,” said Jung. “The government is cautious about stability on the Korean Peninsula and wary of any uncertainty that the succession process in the North may bring.”