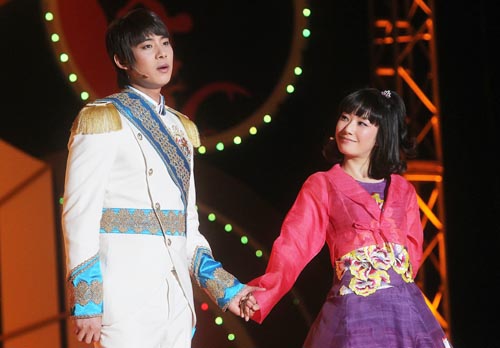 Two actors perform in the musical “The Palace,” based on a bestselling comic book and television drama of the same name. The musical continues through Saturday at Theater Yong at the National Museum of Korea. See THEATER, below. [YONHAP]

Tomorrow: The Korean Symphony Orchestra is holding its 170th concert, entitled “The Romantic.” It includes Bed?ich Smetana‘s “?arka” from “Ma Vlast” (“My Fatherland”), Schumann’s Cello Concerto in A minor, Op. 129, and Dvorak’s Symphony No. 8 in G Major, Op. 88.

The orchestra will be conducted by Heechuhn Choi of the Saxon State Opera Dresden. Cellist Sung-Won Yang, professor of cello at Yonsei University and artistic director of the LIG Chamber Music School, is the special guest.

The Magic of Musicals program features songs from famous musicals such as “Dream Girls,” “Les Miserables,” and “Miss Saigon.” The second program, entitled ABBA Girls the Band, features famous songs by ABBA such as “Dancing Queen” and “I Have a Dream.”

Friday: This concert honors 20 years of diplomatic relations between Korea and Russia and features Tchaikovsky’s Symphony No. 5 in E minor, Op. 64, the Polonaise from “Eugene Onegin” and Rachmaninov’s Concerto for Piano No. 2 in C minor.

Saturday: Leading Asian pop stars will gather in October to create a festive mood ahead of the G-20 Summit in November.

The Asia Song Festival is an annual pop music event in Korea. All proceeds will be donated to Unicef and earmarked for children in flood-stricken Pakistan. Fifteen artists or bands from seven countries will participate, including some of the biggest names in K-pop: Rain, Lee Sung-chul, Kara, 2AM, 4Minute and Beat. The lineup also includes Jane Zhang, known as China’s Mariah Carey for her high octave range, Taiwanese singer and entertainer Joe Cheng and Malaysian singer-songwriter Michael Wong.

Admission is free, but the ticket coupon must be downloaded from the Web site.

The Seoul Metropolitan Chorus is holding a three-concert series this month.

Oct. 26: Israeli-American violinist Itzhak Perlman will perform in Seoul as part of the HyundaiCard Super Concert series. This will be the well-known virtuoso’s first concert in Korea in 19 years.

To Oct. 30: This festival has established itself as one of Asia’s major opera events since its inception in 2003. The festival includes productions from Korea and abroad and features “The Barber of Seville,” “Andrea Chenier,” “The Merry Wives of Windsor,” “The Marriage of Figaro,” “Simsan Kim Chang-sook” and “La Traviata.”

THE PALACE, THE MUSICAL

To Saturday: This musical is based on bestselling Korean comic book “The Palace,” which has sold a record 1.4 million copies. The original television drama of the same name had an audience share of close to 30 percent. The musical focuses on the romance between a young woman and man from different classes.

Friday to Oct. 31: The Sanwoollim Theatre Company performs “Waiting for Godot” by Samuel Beckett as part of the 2010 Seoul Theatre Olympics. The production is directed by Lim Young Woong.

Oct. 28 to Nov. 9: The Wagon Stage Company presents Moliere’s comedy, which tells the story of the trickster Scapin and how he helps two young couples stay together. The tale is brought to life through the actors’ acrobatics and the wit of the original script.

This is the first time in 17 years that the play has been performed in Korea.

The National Center for Korean Traditional

Oct. 26: Lim Ji-ho, a food specialist and author of “My Soul is the Plate, Heaven and Earth is the Food,” will be the special guest for the sixth Korean traditional classic music concert here during October.

There will also be a duet performance of the traditional string instrument gayageum and wind instrument saenghwan.

Thursday to Saturday: The festival, now in its sixth year, has some new elements for fireworks fans.

On opening day, there will be a concert by BoA and Super Junior. Pan-Asian actress Choi Ji-woo will also sign autographs for fans.

On Friday night, the main event is a 60-minute “fireworks musical” featuring fireworks teams from China, Italy and Portugal.

The highlight of the festival, a massive fireworks show over the Gwangan Bridge, will take place on Saturday night.

From Seoul, take a KTX train to Busan.

To Sunday: The Daegu Photo Biennale will exhibit works by more than 240 artists from 22 countries, most of whom are Asian or European.

The main exhibition is entitled “true(E)motion.” The subsections are entitled “Seconds of Life,” “Breaking the Edge” and “Helsinki School.”

The “Helsinki School” section exhibits work by the most well-known artists to come out of the school, including Ulla Jokisalo and Jorma Puranen.

Go to Seongdangmot Station, Daegu Subway line No. 1, exit 1, and walk for 10 minutes.

Oct. 23: This festival allows visitors to experience the seven major religions of Korea: Buddhism, Confucianism, Protestantism, Catholicism, Won-Buddhism, Cheondogyo (the religion of the heavenly way), and the Religion of the People. There will be traditional music performances, magic shows, face painting and more.