Learning to live with freedom isn’t that simple

Learning to live with freedom isn’t that simple 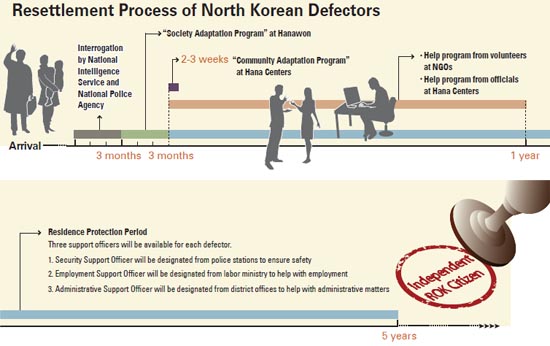 When North Koreans began fleeing their homes in the early 1990s, they received nationwide attention upon reaching the South. Television reports showed them at airports, wearing leis and waving awkwardly at the camera with unsure smiles.

But as their numbers swelled, they were no longer considered objects of interest but, instead, a problem to be dealt with. The South Korean government introduced laws related to defectors in 1997 and opened the Hanawon resettlement facility two years later.

Like defectors, Hanawon has gone through its share of sweeping changes over time - more like trial and errors, one could say. Its programs have changed nine times over the past 11 years. It is also set to undergo a major reshuffle next spring.

The Korea JoongAng Daily was given an exclusive look at Hanawon’s program for this series. Of the facility’s 12-week program for defectors, 46 percent is dedicated to career planning and job training, 31 percent on understanding South Korean society and 13 percent on settlement support.

“A significant portion of our program is dedicated to employment,” said Lee Duk-haeng, director of Hanawon’s education planning division. “In fact, this has been increasing steadily over the past years.”

Many of the defectors we talked to seemed to be on the same page: Making a living is their top priority.

“For most defectors the first three years is a period of trial and error,” said a defector who only identified himself as Kim. “Job training is important.” Kim currently works for a company called “Working NK Refugees,” a job consulting company for defectors.

An Chan-il, head of the Seoul-based World Institute for North Korean Studies, said: “I think it would be most effective to give defectors as many chances as possible to talk with those who came and successfully settled here before them.” An himself defected from the North in 1979. “The people who come to Hanawon, just how much do they know what we went through? And how much time do they get to meet and associate with us?”

Hanawon’s program has been criticized for its uninspiring, indoor, cram-style education.

“It is true that a large of part of the program is done indoors and that defectors complain,” Lee said. “But the program is crucial - to learn what Taegeukgi [South Korea’s national flag] is, how capitalism differs from communism, and so forth.” 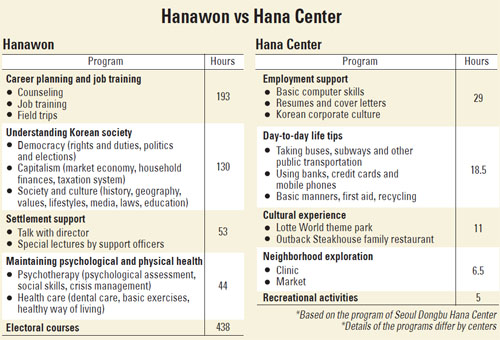 He also defended the length of the program, saying that though they tried reducing it by a couple of weeks, Ministry of Unification officials need at least three months to clear up technical requirements in settling the defectors.

Starting early last year, the government began setting up Hana Centers across the country to continue defectors’ educations at locations closer to their new homes.

Some defectors think that further education is unnecessary - for a while. “It is true that most defectors come to our program reluctantly,” said Kim Jae-jung, head of Dongbu Hana Center. “Some people quit as soon as they land jobs. Only later they realize that they’re not prepared enough and come back to our classes.”

Hana Centers set themselves apart from Hanawon by emphasizing practical matters - teaching defectors how to recycle, use credit cards and send e-mails. Their classes are not mandatory, and they do not require defectors to live within their facilities.

“When people resettle in a new society, naturally it takes a certain amount of time for them to be able to support themselves and function as viable members of society,” said Lee Soo-jung, a professor at University of North Korean Studies at Kyungnam University. “Having a short-term perspective and aiming for immediate results, like getting them to a certain level of employment, is dangerous,” she said.