One defector’s path to hope and new hardships

One defector’s path to hope and new hardships

Lee Won-sik, an English teacher at the Hanawon resettlement center, teaches defectors how to say words like “man,” “leg” and “big.” Students such as Han Jae-suk, featured in this story, have graduated from the institution. By Jeong Chi-ho


Han Jae-suk, a 31-year-old North Korean defector, has endured an odyssey in her effort to resettle in South Korea. The journey has included living for a year and a half in the basement of the South Korean Consulate in Shenyang, China, and studying 12 hours a day in Seoul as part of her training for a new career. She has no regrets.

South Korea is facing a milestone - by next month, 20,000 North Koreans will have resettled in the South. And, with many in the South seeing unification as an inevitability, the government is taking steps to prepare for the expected stream of refugees.

With this as background, a special reporting team of the Korea JoongAng Daily has been exploring the issue further. This is the second day of the in-depth, three-day special report.

Han in many ways represents the story of the North Korean defector, in which the defector shows resolve, courage and determination.

Han, a video editor with a small enterprise in southwest Seoul whose name has been changed for this article, comes home every day after 11 p.m. She isn’t working late hours, but she has been taking lessons in recent months to get a driver’s license.

It will be one of a handful of certifications Han has earned since arriving in Seoul in November 2008. She has obtained licenses certifying proficiency in Microsoft Office and other computer skills, and she has learned accounting, graphic design and visual media.

“I just did my best to learn as many fields as possible, because those licenses are only a small portion of rudimentary skills that South Koreans have and I need to keep up with them to survive,” said Han.

During an hour-long interview with the Korea JoongAng Daily last week near her workplace in Yeongdeungpo District, the 31-year-old woman, clad in a casual cardigan and a pair of True Religion jeans, shared stories about her three-year struggle to settle down in her new country.

After being discharged from Hanawon - the state-run, mandatory resettlement center for North Korean defectors ?- Han started waiting tables at a restaurant. In less than a month, she realized the job was far from what she wanted to do for the rest of her life.

“The majority of female defectors begin their careers in South Korea as waitresses because they have to make money to live,” she said. 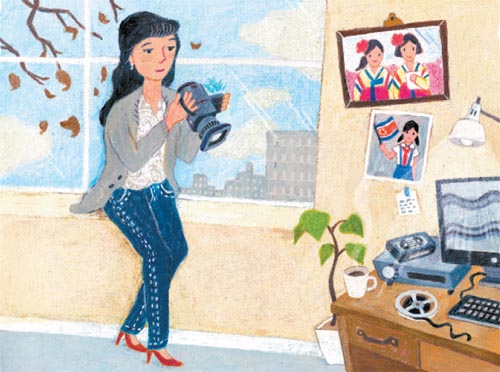 
After quitting the restaurant job, she registered with a hagwon, a private academy, to learn graphic design because drawing had been one of her longtime hobbies. The government subsidizes hagwon expenses for a maximum of five years.

Han had a tough time understanding class lectures because of language differences and often experiences communication issues with South Koreans even now, she confessed.

“Even though North and South Koreans are basically using the same language, it was extremely difficult for me to actually figure out what the lecturer was saying,” Han said. “There were so many foreign words, and some South Korean words were entirely new to me.”

When the 12-hour graphic design classes were finished, she headed to an accounting hagwon because defector friends advised her that learning the field would facilitate her job search.

After six months, Han was employed as a bookkeeper at a small firm, and she worked there for three months. But the job turned out to be too boring for her. She quit again and enrolled in a hagwon for a year to learn visual media.

Because her visual media class was not on the list of government-subsidized fields, Han took several part-time jobs, including writing and appearing in radio shows about North Korea. Although money was tight, her visual media lessons led Han to her current job editing video - an occupation she is enthusiastic about.

The single woman said leaving North Korea was one of the best choices she has made in her life. “Whatever the circumstance, I can at least enjoy basic things enjoyed by others if I try hard,” she said with a shy grin. “Up there [in North Korea], it is very hard, however hard I tried. I have kept it a rule here to work during daytime and learn at night,” she said.

After leaving her hometown in the North, she was stuck in the basement of the South Korean Consulate in Shenyang until Chinese authorities issued her a visa to South Korea. It was the most painful period of her life. “You just can’t do anything but count the days to get out. Everyone in the room including me got sick.”

Unlike many other defectors, who had siblings who already defected to the South, Han left home by herself. Her parents died before she turned 20, and she was leading a routine worker’s life, residing in a dormitory after graduating from school. Thanks to the help of a friend who was good at manipulating electronic gadgets, she was able to gain access to South Korean radio. In North Korea, when one buys a television or a radio, the government sends personnel to limit the devices to a single, state-run channel.

Han wasn’t particularly interested in the politics of the South. It was the intonation and accent of the South Korean emcees that fascinated her. “They talked in such a unique, standard ‘Seoulite’ way,” she said, “Then I thought, why not take the challenge of going there?”

Even after three years in Seoul, Han still feels psychological barriers from South Koreans. She still keeps personal contacts to a minimum.

“I only open my heart to the friends I made at the South Korean Consulate in Shenyang,” she said. “In the first two years in Seoul, we met two to three times a week and took turns sleeping at each other’s place. Now, all of us are busy working. That we are all steadily taking roots here amazes me.”

At her current job, Han shoots and edits promotional videos. She videotapes trips with her friends as well. Earlier this month, Han took on another challenge: Coloring comic books about defectors. “We are going to make it here,” she said confidently.