Honoring the tears of our fathers

Honoring the tears of our fathers 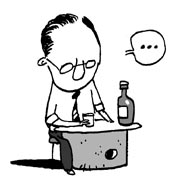 In his 2001 work “Chun-a, Chun-a, Okdan-chun-a, Where is Your Father?” Lee Yoon-ki, a novelist and translator who passed away in August, has a conversation with his daughter about literature, mythology and everyday life. In one passage, the father wakes up in the middle of the night when his daughter comes home late and asks her to abandon her plans to study abroad.

Lee then tells her of his longing for his own father through a shaman’s song: “Chun-a, Chun-a, Okdan-chun-a, where is your father?/My father went on a boat to Hangangsu/He may come back in the spring./Spring is here, but he has not returned/He may be back when the flowers bloom./The flowers are in full bloom, but he has not come back...”

He says: “I cannot sing this song without tears because I am still reliving my father’s death. Perhaps, you, too, will someday feel the same.”

When we think of fathers, we think of the men who secretly wipe their tears with a handkerchief and keep their worries locked away.

Kim Hyeon-seung, the poet who wrote “A Father’s Mind,” recalled: “A father thinks about the future of his children/There are no tears in his eyes/But the liquor a father drinks/Is always halfway full with his tears...”

Many fathers lowered their heads in shame when they were driven out of their workplaces during the Asian financial crisis of the late 1990s. This was the social atmosphere in which the novel “Gasi Gogi,” which compared fish who sacrifice themselves for their offspring to Korea’s father figures, became very popular.

Ten years later, there are still many hardworking fathers willing to sacrifice their happiness for their children’s, but not many of their offspring know it.

The fathers of our time are sad because many children see their fathers in this way - as inferior to appliances and pets. Is this because of the father who neglected his home and children while struggling with his work, or because of the mother who sided with the children when the father was absent? It doesn’t much matter which is right. It is a sad portrait of our society.