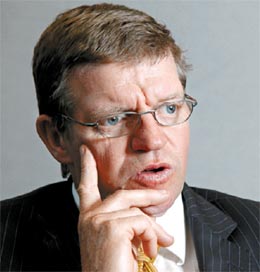 As Korean farmers face growing pressure to accept the opening of the country’s agricultural market as a result of the increasing number of free trade agreements, perhaps they should follow the example of New Zealand, according to that country’s Special Agricultural Trade Envoy Alistair Polson. Once highly protective of its farming sector, New Zealand embraced market reforms and made its agricultural industry one of the most competitive and efficient in the world.

Polson said relying on government subsidies, as Korean farmers do, dulls farmers to market signals and eventually hinders them from seizing new opportunities in overseas markets.

President Lee Myung-bak cited New Zealand as a successful case of agricultural reform after returning from a visit to the country in March. Minister for Food, Agriculture, Forestry and Fisheries Yoo Jeong-bok recently suggested that the government is planning to curtail or streamline subsidies to improve the productivity of Korean agriculture. The government spent 6.5 trillion won ($5.8 billion) this year on agricultural subsidies, accounting for 44.2 percent of the ministry’s budget.

Polson, also a farmer, came to Korea to meet Korean agricultural industry leaders and sat down for an interview last week with the Korea JoongAng Daily at the New Zealand Embassy in Jeong-dong, central Seoul.


Q. What were the main elements of New Zealand’s agricultural reform?

A. New Zealand has always been an agricultural nation, but it has not always been as successful as it is now. Farmers became isolated in the markets. We focused on farm products that enjoyed high levels of government support.

The New Zealand government [elected] in 1984 began a program of radical economic reforms aimed at generating sustained economic growth. All sectors of the economy were affected, but particularly agriculture. The government abolished price supports, tax and lending concessions, and capital and input subsidies. At first, it was a difficult time for farmers. But we surprised even ourselves at how well we adapted, survived and then prospered without government support. Despite an initial decline in farm income and land value, fewer than 1 percent of farmers were forced out of the business. Farm productivity has increased. The ability to respond quickly to signals from the market means farmers make far more efficient production decisions than the government ever could. We have seen a switch into different and newer products, new markets, greater value added in our products and a more efficient processing sector.

Korean farmers are worried that such reforms, including the reduction of government subsidies, will destroy them by making their products uncompetitive in terms of price, compared with those from China or Europe. What would you say to the claim that New Zealand actually succeeded in its reforms because it did not face many global competitors?

We had a limited domestic market, so we had to find other markets overseas. When we got to Europe, we had French, German, Spanish and English farmers producing lamb, and the dairy industry was exactly the same. We have had competition from all over Latin America, America and subsidized products from Europe, so we are no stranger to competition. I think competition is a fact of life. If you worry about competition in your business, you are not going to achieve [anything]. So look to its strengths, what can you produce with comparative advantage and work very hard on that. That has been our recipe. We see China potentially as competitor of ours in some areas, but we [still] see huge opportunities.

The Korean government is implementing economic reforms focused on privatization and raising efficiency. Do you think this is right time for Korea to seek reforms in agriculture?

Rather than suggesting from a distance, what I would say is that pressure is coming as a result of the Doha Round and FTAs. Life is not going to be the same. And I think farmers’ organizations here understand that. So, change will come. So let’s, if it is any use, look at New Zealand’s experiences and make the changes positively. Because the Korean economy is a good, strong one, there is time to invest in transitional measures, invest in the future agriculture industry in this country. It has become a power house from a zero base. I can’t see why it can’t apply it to the agriculture.

Do you think the Korean agriculture sector is distorted now?

It has to be. The level of production and support tells us that it’s quietly heavily subsidized. It would have to have the same sort of distortion we had in 1984. As an observer I may be wrong, but there seems to be a surplus production of rice. What’s the market signal? It is less rice production. That’s a pretty normal principle of doing business, isn’t it? It’s unfortunate perhaps that Korean rice farmers have been given signals by the government for so long.

What do you think of the pace of Korean agricultural reform? Some would say that as more FTAs are signed by Korea, resistance to reform may be wearing thin. Do you see that?

From discussions with farmers here, I noticed there is resignation, a realization that the market will be opened up and FTAs will be signed. A number of people look to the government for transitional help, and I think that’s appropriate, and that should happen.

What transitional help should be given to Korean farmers?

You need government assistance to get into new industries and help them do research, training and market development, and that sort of thing. That’s something this country can afford. The other thing useful for us was offering exit packages so farmers who wanted to get out but couldn’t because of debt, could exit with dignity.