‘Mad about Seoul,’ mayor not thinking of presidential run

‘Mad about Seoul,’ mayor not thinking of presidential run 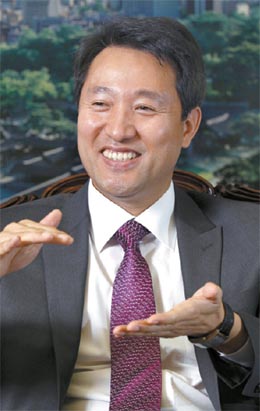 Seoul Mayor Oh Se-hoon, widely considered a strong potential presidential candidate for the 2012 race, said he won’t quit his current job before his term ends in 2014.

In an exclusive interview with the Korea JoongAng Daily at his office on Oct. 12, the Grand National Party politician stressed he’s “all mad about changing Seoul,” and suggested he has no intention of giving up the job early.

“I have expressed my position about this on many different occasions, and I’m just all mad about changing Seoul,” Oh said. “It means I still haven’t completed the goals that I envisioned for Seoul’s future. I feel grateful and honored about how the public views me, but it could be more important to change Seoul than to develop the entire nation.”

While Oh’s predecessor as mayor, President Lee Myung-bak, focused on giving a face-lift to the capital by demolishing an aging expressway and creating a stream and urban park, while also converting one of the world’s most confusing intersections into a grassy plaza in front of City Hall, Oh took a different path: improving culture and design.

Oh, 49, set out to improve the city’s design and cultural activities to improve the quality of life for Seoul citizens and expatriates and raise Seoul’s international profile.

“Four years ago, Seoul ranked 27th in global urban competitiveness, but it went up to ninth place this year,” Oh said. “In recent surveys, Seoul was ranked as a top destination that Chinese and Japanese tourists want to visit. Some think that culture has nothing to do with Seoul’s rise in urban competitiveness rankings, but I don’t buy that.”

“A city becomes a finance hub only when it has advanced culture,” Oh said. “People working in finance are high-class white-collar types, and it’s crucial to provide high-quality education and a good living environment for foreigners. But they won’t suffice. A city must build an infrastructure that allows people to enjoy high-class culture on weekends and become a city where people want to live, work and invest. International evaluations reflect the changes that Seoul has undergone through in the last four years.”

Oh Se-hoon, born in 1961 in Seoul, graduated from the Korea University College of Law in 1983. After completing his military service, Oh opened a law office in 1991.

In 1994, he won a case against a conglomerate whose construction had blocked sunlight from an adjacent apartment complex. He became a fixture on television programs because of his good looks, eloquence and gentle manner of speech.

Elected to the National Assembly in 2000, he would sponsor a law regulating campaign financing. He gave up his seat in 2004 in what he said was a bid to foster “clean politics.”

In an interview with the Korea JoongAng Daily four years ago, after he was elected mayor, Oh said he wanted to build more housing and medical facilities for foreign residents to attract international business. In this month’s interview, Oh said Seoul is still actively responding to expatriate needs. “The only inconvenience for expatriates living in Seoul compared to those living in our rival cities - Hong Kong and Singapore - is the language barrier,” Oh said.

“There are 20 international schools in Seoul, but expatriates have complained about the quality of schools because of their low reputations,” Oh said. “In light of this, Dulwich College Seoul, a British international school, and the Japanese School in Seoul were established in Banpo-dong and Sangam-dong, respectively, in September. Now the construction of a prestigious American school, the Dwight School, is underway in Sangam-dong.”

“Expatriates were frustrated when they felt ill, because they couldn’t get satisfactory treatment in hospitals because of the language barrier,” Oh said. “Twelve general hospitals in Seoul, including Seoul National University Hospital, run centers for expatriates, and they can get contacts for pharmacies and hospitals that speak English, Japanese and Chinese in their neighborhood by dialing 1339, the Seoul Emergency Medical Information Center.”

When Oh was asked if he planned to build more Seoul Global Villages in other areas popular with foreigners, such as the Mongolian town in Gwanghui-dong, Oh said tight budgets preclude further expansions.

“Because it’s difficult to establish other offices soon, Seoul runs on-site counseling sessions for expats in these areas every Sunday since last year,” Oh said.

When Oh was told during the interview that many expats who attended last year’s Seoul Town Meeting complained to the Korea JoongAng Daily that the meeting was focused on promoting ongoing projects and left too little time for expats’ suggestions or questions, Oh said he will listen attentively to expatriates’ criticisms.

“In the upcoming town meeting in December, the Seoul city government will give more time for question-and-answer sessions. It will also run booths in seven foreign languages for expats who didn’t have enough time to ask questions,” Oh said.

Oh also promised he will consider having two town meetings a year, including one on a weekend, in order to accommodate “people with day jobs,” reflecting a suggestion raised to the Korea JoongAng Daily by a Canadian expat.

The mayor, who earned a nickname as “design aficionado” by initiating the Han River Renaissance Project, Dongdaemun Design Plaza and 2010 World Design Capital, said he got “obsessed with design” because design is no longer a luxury but a necessity for a modern city.

“Design is a comprehensive term that also refers to designing policies, services and business management for civil administration,” Oh said. “The mission of Seoul’s mayor is to ensure the happiness and safety of Seoul’s residents and to raise the city’s urban competitiveness for the next generations. Design is money, food, the economy and welfare ... it’s everything.”

Though Oh was criticized by former Prime Minister Han Myeong-sook during the mayoral campaign, who said she was doubtful whether turning the city into a “fake New York or fake Paris” will improve Seoul, Oh said he didn’t consider Han’s argument as a big deal.

Oh gained a large fan base among women in high heels after he came up with the “Women Friendly Seoul” slogan. Oh made Seoul’s pedestrian roads more “female-friendly,” where women can stroll without worrying about getting their high-heels stuck in crevices and manhole covers.

“In a tea time meeting four years ago, one female city official told me her colleagues wore sneakers because their high-heels get stuck on sidewalks,” Oh said. “It reminded me of my wife having a similarly unpleasant experience, and it occurred me that most senior-ranking officials in the city government are male, and many policies were devised based on male-centered views.”

Oh’s design initiatives for Seoul seem to have produced some tangible results. The Seoul Metropolitan Government and the Korean National Commission for Unesco last month signed an MOU in September that grants Seoul the permanent right to use the Unesco logo for its local and international promotions, events and facilities.

“Think of New York and Paris,” Oh said. “The brand image of a country is shaped by its capital city. Seoul’s improved image will elevate Korea’s brand, too.”