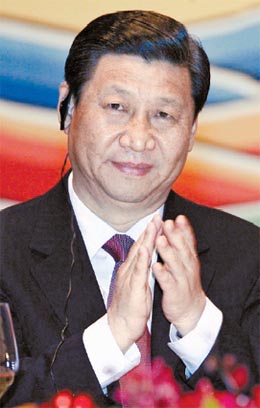 Park Jie-won, floor leader of the Democratic Party, said yesterday that Xi expressed disapproval of the Lee administration’s North Korea policy during a May 2009 meeting with former President Kim Dae-jung in Beijing. Park accompanied Kim to the meeting.

At the end of a four-day meeting of the Chinese Communist Party Monday, Xi was appointed vice chairman of the Central Military Commission, confirming his frontrunner status as the next president. President Hu Jintao is expected to step down as head of the party in 2012 and as president in 2013.

“Xi said the North Korean nuclear crisis should be resolved through North-U.S. dialogue,” Park said. “He also said China invites North Korean officials [to visit] and talk about various issues because the North is lonely.

“He also said China has no choice but to support the North because it shares a border, though China sees both Koreas as brothers,” Park said.

Stressing that a new era will begin in China in two years, Park urged the Lee administration to change its North Korea policy. “And it must remember that its diplomatic relations with China are not smooth,” he added.

Xi is known to be well-informed about affairs on the Korean Peninsula, and his position of stressing inter-Korean reconciliation has been reported in the past.

His first visit to South Korea was in 2005 when he was party secretary of Zhejiang Province. He also visited Pyongyang in March 2008 and Seoul in December 2009.

During his most recent visit to South Korea, Xi met with Lee and stressed Seoul’s need to push for inter-Korean reconciliation through dialogue. “I believe South Korea should also improve inter-Korean relations through dialogue and seek reconciliation and cooperation while playing a decisive role in resuming the six-party talks and easing tensions on the peninsula,” Xi was quoted as saying by the Blue House at the time.

Meanwhile, exchanges between Beijing and Pyongyang have accelerated since North Korea named Kim Jong-un as successor to his father Kim Jong-il, and Chinese President Hu Jintao congratulated the country on the news. A North Korean delegation was sent to China two days after the North’s party conclave.

China also sent Zhou Yongkang, a member of the Standing Committee of the Political Bureau of the Communist Party of China, to North Korea on Oct. 9 to celebrate the Workers’ Party anniversary.