Classic ballet goes to the madhouse

Classic ballet goes to the madhouse 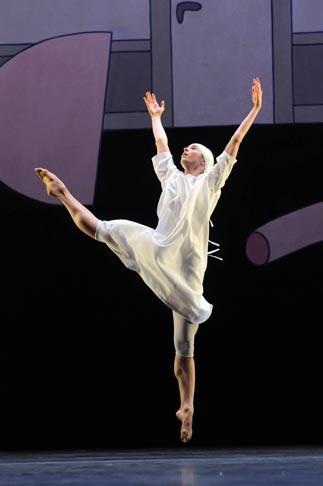 Mats Ek’s retelling of the classic ballet Giselle is radically different from the original. In this version, Giselle goes insane and finds herself in a mental institution after her lover Albrecht dumps her. Provided by Seongnam Arts Center

Matthew Bourne’s “Swan Lake” may be the most well-known modern reinterpretation of the classical ballet. It has successfully turned tradition upside down by replacing the female corps de ballet with male dancers to emerge as a modern-day classic.

Another radical retelling of a classical ballet will have its Korean premiere later this month at the Seongnam Arts Center in Bundang, Gyeonggi. The production is “Giselle,” and was choreographed by acclaimed Swedish choreographer Mats Ek. It will be performed by the Lyon Opera Ballet from France.

“Mats Ek’s version had its worldwide premiere 27 years ago but is still considered a textbook example when it comes to a modern-day rendition of a classical ballet,” Lee Ji-young, a Seongnam Arts Center spokeswoman, said at a press conference yesterday at Centre Culturel Francais in Seoul.

The music and plot will be the same as the original 1841 version. But Ek has transformed the naive and weak-hearted country girl Giselle into a developmentally disabled woman who is trapped in her own world and bullied by the people in her village. While in the original, Giselle dies of a broken heart after her lover - the nobleman Albrecht - betrays her, Ek’s version has her going insane and getting hospitalized in a mental institution. The Willis - vampirish females who are disappointed with love - have also been replaced by Giselle’s fellow patients at the mental hospital. In addition, dancers don’t wear toe shoes in Ek’s version.

Esteemed for his radical and controversial reworking of great ballets, Ek once said that the reinterpretation of classics is a way to keep things fresh for the audience. He also said that adhering to the classics without a new approach will only contribute to losing the audience “very rapidly.”

Ek brought his first work, “Swan Lake” - danced by the 50-year-old Cullberg Ballet of Sweden - to Korea in 2003. He formerly served as the artistic director of the troupe, which was founded by his mother. He is also the son of Sweden’s Royal Dramatic Theater actor Anders Ek. Having created or recreated some 30 ballets over the past 40 years, Ek is now a freelance choreographer. He brought another of his works, “Carmen,” to Korea in 2006.

Lee Sora, the only Korean member of the troupe who will appear in this production, noted that the work has many elements that will appeal to the Korean audience.

“Most audience members tend to think that modern ballet is dark and difficult to understand, but this work has a rich plot, dramatic and powerful,” she said.

The ballet’s parent company, the Opera National de Lyon, is noted for having its own permanent orchestra, choir and ballet. Unlike other ballet companies, the Lyon Opera Ballet does not have performance hierarchy.

Yorgos Loukos, the troupe’s artistic director, told the press: “All 32 dancers are soloists and even those who have been in the troupe just a week could dance solo if the choreographer chooses.”