Sound spiritual reminder for us all

Sound spiritual reminder for us all 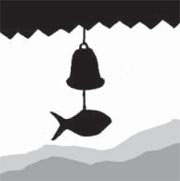 “In my dream, I saw something that made clear sounds/I looked around and saw that it was floating in the air, enjoying the joys of heaven/Even in my sleep, I was pleased to hear the sound and after listening to it for some time, I woke up/When I finally opened my eyes, I realized that the sound was a wind bell.”

This poem, “Dream of Wind Bells,” was written by Eungyun, a Buddhist high priest in the latter part of the Joseon Dynasty. Eungyun also published “Gyeongamjip,” a collection of poems and essays.

Wind chimes or bells that hang under the eaves of Buddhist temples or on stone pagodas, make bright, clear sounds. But what are the “joys of heaven” that the poem mentions?

To borrow an expression from Zhuangzi, the joys of heaven are “always in a state of balance and well-versed in everything in the universe.” He was saying that the sound of the bell should be a reminder for us to rid ourselves of agony and restore our peace of mind.

According to the Avatamsaka Sutra, the wind does not hesitate and blows without concern for what is in its path. Therefore, Buddhists compare wind to being free from all obstacles. As the wind makes the chimes sound, it naturally washes the dirt from our minds.

Temple residents are not allowed to keep animals as pets, but fish are an exception and many temples have fish in their ponds. As with the wind bell, having fish swim freely in a pond is symbolic of the freedom from all obstacles. It is the boundlessness of the wind itself.

As if to emphasize the point, the wind bells in many Buddhist temples have fish-shaped pendulums that actually make sounds when the bell is swayed by the wind. But there is another reason for the fish’s presence.

Fish never close their eyes. They keep their eyes wide open whether asleep or awake. It is possible the temple wind bells have fish-shaped pendulums to remind the monks of the diligence with which they should pursue their studies. The constant sound of the wind bell is another reminder of the consistency with which they must live their lives.

An month-long exhibition of wind chimes from the Three Kingdoms period through the Joseon Dynasty is being held at Mireuksa Temple in Iksan, North Jeolla. As we struggle through our busy lives, the exhibit stands as an excellent reminder of the importance of freedom, happiness and peace of mind.