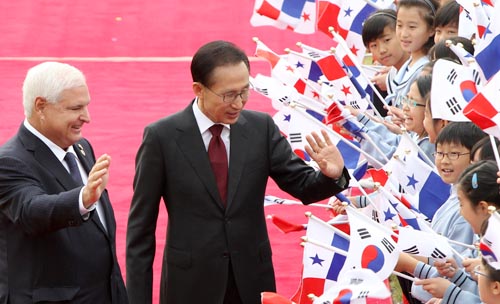 
Leaders of Panama and Korea agreed yesterday to step up bilateral cooperation in resources development and infrastructure construction projects in the Central American country, the Blue House said.

President Lee Myung-bak met with Panamanian President Ricardo Martinelli yesterday to discuss the growing ties between the two countries. Bilateral cooperation on trade, investment, resources and infrastructure as well as global issues were discussed during the summit at the Blue House.

According to a Blue House press release, Lee asked for Martinelli’s support for Korean companies’ plans to participate in infrastructure expansion projects initiated by the Panamanian government. Panama is now planning to expand the Panama Canal and build dams as well as construct subways and railroads.

“In connection with mine development, Martinelli vowed to make an effort to facilitate the advancement of competitive foreign businesses - including Korean companies - into the mining industry in Panama through the speedy revision of relevant laws,” the press release said.

The Panamanian leader also promised Korea access to the country’s raw materials, such as gold, silver and nonferrous metals, said Kim Hee-sun, the Blue House spokeswoman. “He also said shipbuilding and hydropower generation are industries in his country in which Korean companies can actively participate.”

The two leaders also discussed Panama’s plan to expand its canal, Kim said. “Martinelli stressed that Korea is one of the top five countries in the world that use the canal and that the project is closely linked to the Korean economy,” she said.

With Lee and Martinelli in attendance, the two countries inked a double taxation avoidance agreement.

The Busan Port Authority and the Maritime Authority of Panama also signed a memorandum of understanding aimed at increasing the volume of maritime trade. Martinelli is the first Panamanian president to visit Korea since the two countries tied the diplomatic knot in September 1962.