Festival of big films made on a small gadget

Festival of big films made on a small gadget 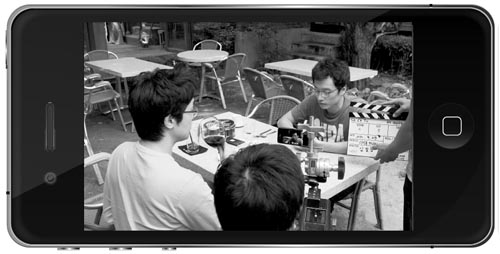 In “Super Deokhu,” by Lim Pil-sung, two iPhone fans go on a hilarious quest to find a gadget guru. It is one of 12 films that are part of the iPhone 4 Film Festival. Provided by the organizer


The much-anticipated arrival of the iPhone here last November changed many aspects of people’s lives. An obscure musician instantly became famous when a video she made of herself playing a song on the device went viral on the Web. And now Korean users have a variety of new applications to make their lives more convenient. The iPhone’s arrival has also had an impact on the Korean film industry.

In the first festival of its kind, a dozen renowned Korean filmmakers and cameramen were challenged to make short films with the iPhone 4. Their creations will be screened as part of the iPhone 4 Film Festival, which runs through end of the month.

For these film-industry people, who are accustomed to lugging around bulky cameras and equipment, shooting a film with the 137-gram (0.3 pounds) digital gadget was a relief, but presented a number of technical obstacles.

“Since the phone is so small and light, it was hard to keep my hands from shaking during filming,” said Bong, who attended a festival press conference in Gwanghwamun, central Seoul, earlier this month.

To solve this problem, some teams made special tools for the smartphone to replicate a camera dolly.

Since a single iPhone battery does not have enough power for a day-long shoot, teams had to use between two and three iPhones a day.

But most of the directors agreed that it was a unique and pleasant experience.

“If I had one more chance, I would make a 90-minute feature film with it,” Bong said.

Jeong said the project challenged him to distinguish his regular work from the work he did with the device.

“I tried to find unique angles and create an atmosphere that could be only made with the iPhone,” Jeong said. “I hope [the iPhone] becomes an outlet for creative film lovers in the future.”

Some of the films are poetic, some are comical and some are more avant-garde.

Bong’s “Tasty Imagination” centers on a woman whose imagination runs wild when she falls in love with a man sitting next to her at a restaurant.

In this film, the shots of the food are particularly impressive. Directors say that food is difficult to deal with because it is hard to make the food look appealing even with an ordinary lens, so food scenes usually require additional equipment.

“When I first got the iPhone, I realized that its built-in close-up function is excellent and shows vivid colors perfectly,” said Bong.

The main character, a girl named Hye-ji, loves taking pictures of herself with her iPhone. The photos are vertical and Lee uses the same orientation for his scenes, meaning that the images on screen are also shown in a vertical frame. But when Hye-ji meets her Mr. Right, the pictures she takes of her and her boyfriend appear in a horizontal frame, so Lee changes the film’s orientation to a regular, widescreen format.

“Audiences always watch films in widescreen format, whether they want or not. I wanted to do something new by using a different frame of reference,” Lee said. “By doing so, I believed the audience could discover something new in their ordinary lives.

“Plus, you can watch my film any way you want on your mobile phone. If you don’t like the vertical orientation, you can watch it in widescreen mode.”

“Super Deokhu” directed by filmmaker Lim Pil-sung is the most humorous of the 12 films.

The Korean word deokhu originates from Japanese word otaku, which refers to people who are fanatical about something, such as IT gadgets, animated films or action figures.

Super Deokhu is about two die-hard iPhone fans and their journey to find someone who can attach a protective film to their newly purchased iPhone without causing air bubbles to form. The characters wear ultra-serious expressions and get into petty fights throughout the film, resulting in some very funny scenes. When Super Deokhu was shown at a press screening earlier this month, the audience kept bursting into laughter.

The film begins with a bet between Jeong and Lee. Since Jeong knows Lee is the type of person who can’t stand being lazy, Jeong challenges him to curl up in a motel room all day and do nothing. If Lee finishes the mission successfully, Jeong promises to give him a glossy iPhone 4. The film captures Lee on his long day off, and it is a pleasure to see a different side of the famed director.

The festival is a novel idea, but whether it catches on with moveigoers remains to be seen.

Kim Ho-sung, head of the iPhone 4 Film Festival committee, said they will gather feedback from audiences during the festival and then decide whether to turn it into an annual event.

For now, festival screenings will continue at Olleh KT Square Dream Hall in Gwanghwamun, central Seoul, on weekends. Except for Super Deokhu and Half Joke Half Truth, the rest of the offerings are silent films.

Viewers can also watch the films at the festival Web site (www.iPhone4filmfestival.co.kr) or through an application on the iPhone. The films are also being screened on QOOK TV, one of the nation’s IPTV channels.

Meanwhile, director Park Chan-wook has also made a short film with the iPhone, scheduled to be released in theaters nationwide in December. It is getting released as a part of a promotion plan designed by KT, Korea’s largest telecommunications company, which exclusively sells the iPhone in Korea.

Oldboy earned the Grand Prix award at the Cannes Film Festival in 2004.