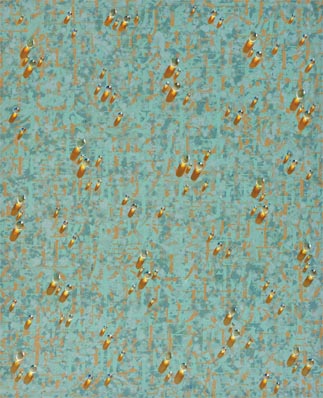 When asked why he has continued to paint water drops for nearly four decades, Kim Tschang-yeul, one of the most renowned Korean artists of his generation, answered with a smile, “Well, men feel like going out with every pretty woman they see, but they can’t because they are married. The same is true for artists.

The 81-year-old artist was having tea and talking about his work with a group of reporters earlier this month at the Gangnam branch of Gallery Hyundai in Sinsa-dong, southern Seoul.

The gallery will host a solo exhibition of the artist’s work, which consists of about 50 paintings from recent years.

Most of the works in the exhibition, which continues through Nov. 7, are oil paintings that look like traditional paper panels inscribed with Chinese characters on which beads of water have formed.

Viewers unfamiliar with Kim’s works will be curious about how the water drops can remain on the canvas as brilliantly-shining beads instead of permeating it. But it’s just an illusion.

His penchant for myriad meanings is reflected in his paintings, which create illusions in the trompe-l’oeil tradition and are open to various interpretations. Some are entertained by the works, while others find them to be meditative.

Art critic Kim Yong-dae once characterized Kim this way: “Like a monk in training who works bent forward for hours and days, he repeats the process.”

Water drops have become Kim’s signature since he showed his first water drop paintings at the “Salon de Mai” show in Paris in 1972, for which he received favorable reviews.

Commenting in his use of Chinese characters, Kim said, “The printed letters emphasize the soft texture of the water drops. And I prefer Chinese characters to other letters because they look solid and because I have a certain nostalgia for the letters I learned from my grandfather when I was a child.”

The artist currently has studios in both Seoul and Paris, and his works are housed in art museums worldwide including the Pompidou Center in France.