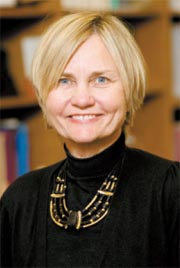 
Oster: You haven’t changed since you were my student in Economics and Competitive Strategies some quarter of a century ago.

Lho: Thanks Sharon. Neither have you. But I’ve actually gained 15 percent in weight and lost 25 percent of my hair since then.
My first question: What differentiates the MBA program at Yale School of Management and the MBA programs at Harvard, Stanford, Chicago or Wharton?
Oster: Although all of these schools offer an MBA degree, each one is quite distinct. There are generalizations that are made: Harvard does leadership; Stanford does innovation; MIT does technology; Chicago focuses on economics; Columbia and Wharton are well known for finance.
While these generalizations may hold true to a limited extent, I would also say that each of these programs has strengths in many other areas. Yale SOM distinguishes itself through its small size and strong sense of community, through its integrated MBA curriculum and the collaborative nature of both teaching and learning at the school, with its strong connections with the rest of Yale, and perhaps most importantly through its mission to educate leaders for business and society.
So, we do leadership, innovation and technology, and economics and finance, but we teach those subjects in an integrated way, within a context that recognizes the interconnected nature of business and society.

Lho: Why did Yale start the MBA program so late compared to other major universities, especially given Yale’s historic strength in economics and sociology?
Oster: The historic focus of Yale has always been the undergraduate college. And, because we had such strengths in economics, sociology and the other social sciences, I think the university did not feel it needed an MBA program to compete with other programs that had already been established.
In the early 1970s, the Yale president, along with a number of passionate and accomplished alumni, determined to found a business school that would embrace the Yale model of education.
Since its founding in 1974, the school has always been unique in its approach to management education. Yale SOM’s businesssociety mission is deeply rooted in Yale University’s founding ideals of educating leaders in service to society.

Lho: What is Yale SOM’s connection with Korea? How many alumni are there and what are your plans to recruit talent from Korea for Yale SOM?
Oster: Of course, the U.S. and Korea have a long and close relationship. Yale’s connections with Korea is strong and growing stronger under the leadership of President (Richard) Levin, and Yale SOM is an important part of that initiative. Nearly 1,000 of Yale SOM’s 6,000 alumni are based internationally.
Almost 60 percent of our alumni living outside the U.S. are concentrated in six countries, one of which is Korea. So we have a small but strong contingent of nearly 50 dedicated alumni living and working in Korea. Korean students have been part of SOM for decades.

Lho: We heard that Yale SOM will be headed by a new dean in 2011? Can you tell us a bit more about Ted Snyder?
Oster: Ted Snyder will be coming on as dean in July 2011. Ted is an extraordinarily accomplished dean and everyone at SOM is looking forward to his arrival, myself included.
He is an economist by training, but has spent the bulk of his career running two top U.S. business schools: the University of Virginia’s Darden School of Business, and, for the last nine years, the Chicago Booth School of Business. Ted has been very successful at the University of Chicago and has been especially active on the international side.

Lho: We also hear that Yale SOM is constructing a new building and campus.
Oster: We have been so fortunate to have Lord Norman Foster, one of modern architecture’s most visionary practitioners, design our building, scheduled to open in the fall of 2013.
Lord Foster is a Yale architecture graduate and a winner of the Pritzker Architecture Prize, and he’s designed a sleek, modern campus that reflects the SOM community. (You can see pictures of the new campus at: http://mba.yale.edu/new_campus/index.shtml)

Lho: Some reflections on your tenure as Dean?
Oster: My years as dean have been wonderful. I have traveled extensively and had the opportunity to reconnect with so many alumni I formerly taught.
On my recent trip to Korea, I was fortunate enough to meet not only with former students from over a 20 year span, but also with several parents of former and current students.
I was so impressed by the strength of Korea-Yale SOM ties.