Can octopus heads be hazardous to your health?

Can octopus heads be hazardous to your health? 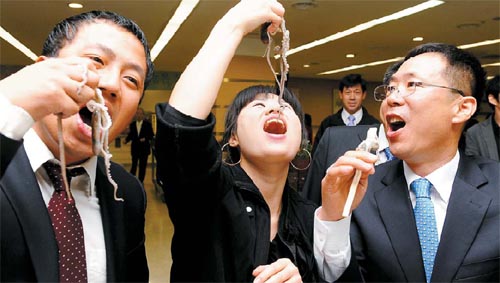 Officials at Seongdong District Office in Seoul dig in at an “Octopus Tasting Event” at their cafeteria yesterday. The event was held to calm public concern over the safety of octopuses and to promote octopus consumption. [NEWSIS]


How many octopus heads is it safe to eat on a daily basis?

The government says two is the maximum, because of heavy cadmium levels found in local and imported octopuses. But that has infuriated restaurateurs and fishermen in South Jeolla, who say the government’s warning has cost them a bundle in lost sales.

The octopus head war began in September, when the Seoul Metropolitan Government announced that it discovered heavy concentration of cadmium in octopus heads sold in Seoul.

According to the city government, of three Korean and six Chinese octopuses purchased at local fish markets, supermarkets and department stores, up to 29.3 milligrams of cadmium per kilogram was found in the heads, 14 times higher than the permitted level of 2.0 milligrams. Cadmium is a carcinogen that also poisons the liver and kidneys.

The government advised consumers to completely remove any internal organs, ink and intestinal matter before eating octopus heads - which restaurants rarely do because it takes away most of their taste.

Octopus heads are a favorite dish in Korea because of their nutritional benefits and reputation for building sexual stamina. Nakji-bokkeum, a stir-fried octopus dish, is known for going well with soju.

As concerns grew, the Korea Food and Drug Administration on Sept. 30 released its own research results on 67 local and imported octopuses. Its conclusion: “It’s okay to eat two octopuses per day without removing the internal organs of the heads.”

Then came the backlash. A group of 30 fishermen from Muan in South Jeolla met Seoul Mayor Oh Se-hoon on Oct. 8 and threatened to sue the city government if it didn’t offer an official apology and compensation for business losses. Muan and Sinan, both in South Jeolla, are the two main octopus producers in Korea, with over 2,000 households engaged in the business. Over 12 million octopuses worth 40 billion won ($35.4 million) are produced every year.

Mayor Oh apologized for causing losses but explained, “The intent of the research was to inform people of the health risks of eating internal organs of octopus heads, and it didn’t mean people shouldn’t eat octopus.”

Oh promised he will come up with measures to encourage people to eat octopus to minimize fishermen’s losses.

The debate then went national, when a group of lawmakers brought a live octopus into a National Assembly audit session on Oct. 11 to show solidarity with the fishermen. Other lawmakers burst into laughter when the octopus tried to escape from the jar.

Oh apologized once more to restaurateurs and fishermen “for troubling their business” but said the city’s position hasn’t changed.

“It is an official stance of the Seoul Metropolitan Government that eating the internal organs and heads of octopuses is not recommended,” Oh said.

To mend fences with the fishermen, the city government named Oct. 20 as “Seoul Nakji Day” (nakji is Korean for octopus) and served nakji bibimbap, rice mixed with vegetables and stir-fried octopus, for yesterday’s lunch menu at the Seoul City Hall cafeteria for 1,800 civil servants. But the cafeteria removed the internal organs from the octopus heads.

The cafeteria was full and the food sold out in 40 minutes.

“Today’s lunch was to raise awareness that eating octopus is safe when its internal organs are removed,” a Seoul city government official said.

According to investigators at the Seoul Southern District Prosecutors’ Office, an octopus retailer surnamed Kwon, who runs his own market at a supermarket chain, colluded with a staffer surnamed Lim to sell 116 million won ($102,745) worth of Chinese octopus from April 2009 to August 2010.