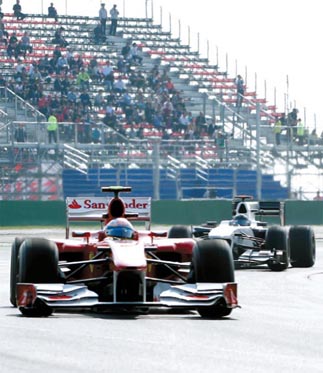 The long awaited 2010 Formula 1 Korean Grand Prix kicked off yesterday at the Korean International Circuit (KIC) in Yeongam, South Jeolla, despite earlier fears the track and other facilities may not be ready.

Two 90-minute practice sessions were completed by the 24 drivers racing super-charged F1 machines, although the crowds were anemic.

“The track has been very good and I enjoyed driving it today,” said Michael Schumacher, seven time world champion who made his comeback this season from a retirement in 2006, and who came in at 6th place in the first practice session. “Of course a new track with totally fresh asphalt needs to rubber in but it got better and improved massively improved massively over the day,” Schumacher said. “I am very pleasantly surprised with the circuit. It is very demanding, challenging and tricky, which provides a challenge that I like a lot.”

Located in one of the most remote areas of the country, some people feared that Yeongam may not be the right place for such an historic event.

Concerns were also raised about wan ticket sales, as it was recently reported that local government employees were designated to sell a certain number of tickets to friends and relatives.

According to Agence France-Presse, reigning Formula One world champion Jenson Button expressed concern about the entry to the pit lane at the Yeongam circuit, saying it was “scary.”

“The only worry I have is the pit entry, which is a bit dangerous. It’s a little bit scary,” Button said.

The top five drivers of the Formula One competition with Bernie Ecclestone, CEO of Formula One Management, at the Korean Grand Prix in Yeongam, South Jeolla. [NEWSIS]


The pit lane entry is situated on the outside of the counterclockwise track, with cars braking in the middle of Turn 18, a blind right-hand corner in a narrow section of the circuit.

“The crowd turnout was not so great today because it was a Friday, which is a working day for most people,” said a KAVO (Korea Auto Valley Operation) official, which is the organizer of the race. “But ticket sales are not as bad as people have worried, and we expect a good event in the weekend.”

Today, a third practice session will be held along with the qualifying round before tomorrow’s Grand Prix race.