Babies are nice, but don’t forget the jobs

Babies are nice, but don’t forget the jobs 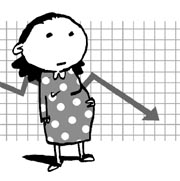 The government’s current campaign to boost the birthrate is nothing new. Even the kings of the Joseon Dynasty (1392?1897) encouraged people to have more children, because it was so common for the population to fall by one-third whenever an epidemic struck. For triplets, the king would confer 10 sacks of rice and beans to the family. Ten sacks of rice were worth 50 acres of rice paddies at the time.

“The Annals of King Myeongjong” records the birth of triplets in Wonju, Gangwon, and the birth of quadruplets in Yangsan, South Gyeongsang. After several years of bad harvests, the finance minister submitted a proposal to downsize the gift to one sack of rice. But King Myeongjong insisted on 10 sacks. He was determined to boost the birthrate and expand the population.

One of the secrets to the success of Fan Li - a famous minister in ancient China - was a campaign to promote childbirth. When men and women did not get married by a certain age, the parents were punished. Marriage between two people with a wide age gap was prohibited, because there was a lower chance of bearing children. Remarriages for widows and widowers were encouraged. In his later years, Li recognized the dilemma of an expanding population and a stagnant food supply.

Romanian dictator Nicolae Ceausescu, however, did not.

He thought that a larger population would make the nation stronger, and so he banned abortion and birth control. Women who did not get pregnant were fined. The fertility rate doubled in a year. But what awaited the “Children of Ceausescu” was a crumbled national economy that could not even afford food rations.

It is understandable that French youth are leading protests opposing pension reform. If the retirement age is modified, they would be left with fewer job openings. It is an outcry of “Generation Precaire,” the Precarious Generation, which suffers from high unemployment. A great challenge looms. France is having a baby boom because of generous benefits, but will there be enough food in France to feed its children?

After seeing the case of France, is it rash to worry about Korea? The low fertility rate is an urgent issue, but we must not forget to secure food and jobs for future generations. The last thing we want to see is children protesting in the streets and asking why people had children in a country with no jobs.