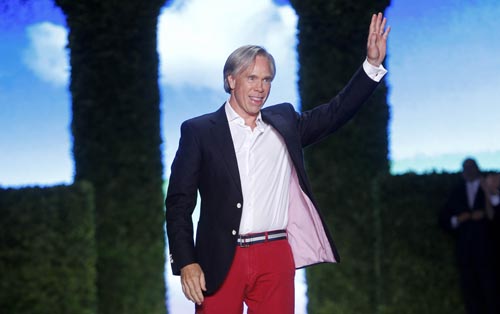 This Sept. 12 file photo shows designer Tommy Hilfiger as he greets the crowd after showing his spring 2011 collection during Fashion Week in New York. AP/Yonhap


He’s rocked and he's rolled - and Tommy Hilfiger has done it for more than 25 years.

Hilfiger is marking 25 years of his namesake brand this fall, celebrating with a splashy show during Fashion Week, tailgate parties and anniversary products, but his career is, in fact, longer than that: He’s had a fashion gig since high school when he decided Elmira, New York, needed a denim store to keep up with the 1960s rock-star trends.

He opened People’s Place catering to the local college crowd and everyone headed to Woodstock, and took out ads in the local newspaper boasting the best bell-bottoms and red fox jackets for “foxy” ladies. He’d promote sales as “savings for swingers.”

“I wanted to build a business around all this pop culture,” says Hilfiger, who ticks off music, movies, celebrity and art as the long-term common threads in his signature look that has evolved through phases of hippie, preppy, Americana and glitzy influences.

Moving with the times doesn’t make him or his brand inconsistent, says Hilfiger. On the contrary, he explains, it gives his collection and its customers an interesting, vibrant lifestyle that adopts more than just one aesthetic.

The style icons he admires - for their personal looks as well as their ability to tap the zeitgeist - range from Norman Rockwell to the Beatles, from Marilyn Monroe to Beyonce. He shows off just what a fan he is of the big picture around him in a new ultra-luxe $550 book published by Assouline Publishing Inc. that is, essentially, Hilfiger’s scrapbook.

Scribbles in Hilfiger’s handwriting explain his affinity for Steve McQueen, tartan plaid and tongue-in-cheek advertising. He’s created collages that pay tribute to people, places and things that move the needle and generate buzz, but there also are personal moments - a family portrait of Hilfiger and his eight siblings, and a very Grace Kelly-esque photo of his wife Dee, for example - that do give the sense of a man with the full plate that he likes to describe.

“One of the most important things to me is to make things real, not have models who are perfectly groomed or clothes that are too perfect. It all has to have a twist because that’s how people live.”

Despite the success and fame he enjoys now, Hilfiger comes across as a very normal guy - and that’s a compliment. He is approachable, affable and, on the early Saturday morning of this interview, punctual, even though he did a quick turnaround from a late-night store appearance.

Hilfiger, 59, certainly hasn’t been immune to ups and downs. The brand has been bought and sold by investors with Phillips-Van Heusen Corp. as its current owner while Hilfiger has creative control.

He has been criticized - alternately - for dabbling in too-fancy, high-price pieces and for going too casual with logo-covered looks.

But that seems to have tempered since Hilfiger recommitted himself to clean, modern classics a few years ago. With a booming business overseas - one that never really stopped even when the brand waned in the U.S. in the mid-2000s - Hilfiger is now exclusive in the U.S. to Hilfiger stand-alone stores, including a huge flagship on Fifth Avenue, and Macy’s.

“There have been a few incarnations of Tommy himself and his brand, but what’s interesting now is he’s firing on all cylinders,” says Durand Guion, Macy’s men’s fashion director. “He’s come into his own. The brand has its own appeal, particularly that it’s an American brand with an American sensibility. It’s not a ‘me-too’ brand or a copycat of another brand.”

There’s a market out there for rugby shirts, navy blazers, chinos and cotton sundresses, and Hilfiger embraces his leading place in it.

To describe the spring 2011 collection that previewed last month on the runway, Hilfiger used the shorthand “rockabilly meets the country club set.”

Among those in the front row were Jennifer Lopez, Bradley Cooper, Lenny Kravitz and Christina Hendricks, and they all attended a big, lavish party afterward at the Metropolitan Opera House complete with seemingly endless chandeliers and champagne.

It’s not news that celebrities have become key ambassadors in the fashion world, but Hilfiger courts them a little differently than most of his peers. Because the emphasis in his company is on more relatable clothes, there isn’t the opportunity for as many red-carpet moments. But stars, like his customers, have all those other things to dress for: weekends, vacations, sports.

It’s really all the good stuff, Hilfiger says. “I’ve learned not to take things so seriously around here. I’m using the ‘f-word’ a lot lately: fun - and that’s what fashion is. Clothes are meant to be fun.”