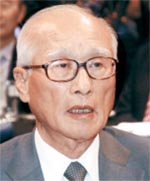 The former founder and chairman of now defunct Daewoo Group this week made his first public appearance in seven months.

Kim Woo-joong returned to Seoul from Vietnam to participate in the one-year anniversary of the Daewoosky Institute at the AW Convention Center in Buam-dong, central Seoul on Tuesday.

“As I understand it, former chairman Kim arrived from Vietnam on Monday to participate in the anniversary ceremony,” an official at the institute said.

Kim did not say much except for thanking everyone for attending.

He also asked his former employees to visit Vietnam - where he’d foot the bill for dinner.

Kim additionally thanked his former employees on their decision to help ease the current unemployment crisis for youth in the country, which the former chairman raised earlier this year.

The Daewoosky Institute will start a global talent nurturing program that helps send unemployed college graduates to study and train abroad. The institute said it will start the program for 100 students next year.

The last time the former chairman made a public appearance was in March when he participated in the 43rd anniversary of Daewoo Group’s founding at the Millennium Hilton Hotel.

In March, Kim said it was time for the defunct Daewoo to contribute to society.

“In seven years, Daewoo will be celebrating its 50th anniversary, and in that time, we should find three to four projects that could actually be [put into] practice,” Kim said.

At the event this week, 250 former Daewoo employees turned up.

The Daewoosky Institute started off as a social network for former Daewoo executives and employees, but last year became an official corporation.

“Sky” is an acronym that stands for segye, which in Korean means world, kyungyoung, which means management, and youngoo, which is translated as research.