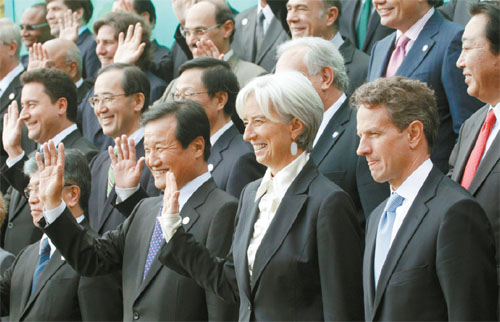 
President Lee Myung-bak yesterday urged the finance ministers and central bank governors from the G-20 countries to narrow differences on key issues so that the forthcoming G-20 Summit in Seoul next month proves successful.

Lee addressed the opening of the two-day conference that is meant to settle the final agenda for the summit, which is expected to discuss reforming the voting rules of the International Monetary Fund, among other issues, and overcoming imbalances in the global economy.

However, the meeting in Gyeongju, North Gyeongsang, is expected to be dominated by the continuing dispute among the major economies, including China and United States, about the competitive devaluation of their currencies. Lee did not directly mention the issue in his address.

But Lee said the G-20 members should meet the November deadline for approving a shift in IMF voting rights to emerging economies.

He also urged agreement on providing more development aid to poor countries and the creation of a global financial safety net, which have been two priority agenda items being pushed by the Korean government.

Lee warned that if the upcoming G-20 Summit fails to make much progress, it could put the global economy at risk once again. “For the G-20 to continue as a premier forum, the Seoul Summit must succeed.”

Lee then joked, “If you don’t reach a compromise, we may not operate bus, train or airplane services for you to go back home.”

But the first day’s session appeared to be devoted to the currency issue that threatens to split the G-20. U.S. Treasury Secretary Timothy Geithner asked nations with large trade surpluses to “refrain from exchange rate policies designed to achieve competitive advantage.” He said G-20 nations should set specific targets to reduce their trade surpluses, but the proposal immediately met opposition from other countries.